Peregrine and Remedy a Solid Combination 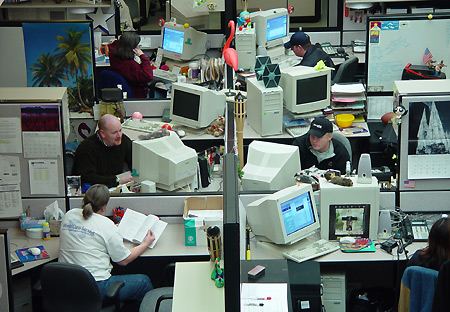 Peregrine's support staff is a group constantly in motion, using both their computers and each other to resolve users' questions.

The Fruits of Peregrine's Acquisition of Remedy Corp. are Already Emerging

When Peregrine Systems announced a plan to acquire Remedy Corporation last June, it was clear why the two companies might come together. Combined, they would count over 90 percent of the Fortune 1000 on their client list, representing an opportunity to dominate the market for infrastructure management software. With companies worldwide increasingly focusing on managing the cost of doing business by tracking both assets and people, a task automated by Peregrine and Remedy products, bringing together the two market leaders was seen as a tremendous opportunity.

"Bigger is better" does not always hold true, but that's part of what makes the marriage of Peregrine and Remedy so unusual. Peregrine's off-the-shelf solutions like Asset Center and Service Center are a perfect complement to Remedy's customiz-able Action Request System. The companies are meshing in other ways as well, as demonstrated by the former Remedy Support Services division that is housed in Hacienda.

"Peregrine has been very focused on the integration of the support functions and making that as smooth as possible," explains Teri Coleman, product manager for the Support Services group. "We were the only division that was assigned a director of integration who worked out of Peregrine's San Diego headquarters and we've seen over 35 different integration projects just related to support and support processes. I think we've seen some real benefits in that."

"(Peregrine's corporate leadership) appreciates what a strategic asset a customer support operation is, from both a customer retention and bottom-line profitability perspective," he says.

While there has yet to be an integration of the two company's product lines Tagg says that is likely still two years away the new, combined enterprise is finding its direction in other ways.

"Before we integrate products we need to integrate what we agree upon as standards of service going forward," says Coleman. "What is it that defines customer satisfaction? How do customers know that we feel their suggestions are important? How do we make sure that we improve the service we provide, based on their feedback? I think those ideas are starting to be integrated quickly, throughout the global organization."

"From a philosophical perspective, over the years every process that we've implemented at Remedy in Support has been customer focused," adds Tagg. "Everything that we've done, you can draw a straight line to 'the customer benefits by doing this.' That's the strategy that's being adopted now."

Coleman, a veteran of acquisitions at other companies, notes a remarkable level of cooperation.

"I've never been in a takeover where the attitude is, 'let's do what's best' instead of 'mine is better than yours.'" "That level of cooperation is being emphasized at the executive level, too," notes Tagg. "And with the suite of products that we have, the sky's the limit."