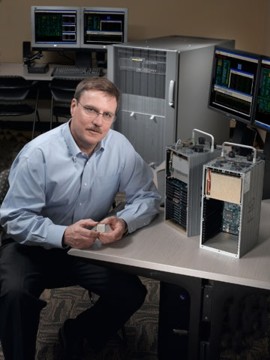 CPU Technology, Inc., an electronic systems company specializing in embedded computer systems for a broad variety of applications, has signed a lease for a 41,450 square foot facility at 5731 West Las Positas Boulevard.

The new location will serve as the company's primary engineering and manufacturing facility. The company has an additional building in Pleasanton which houses their Research and Development group. The company expects to employ 130 people at the new location, creating about 90 new jobs in the process.

"We believe that attractive and convenient facilities in locations that offer a broad range of amenities to our employees have a tangible impact on the value of our company and the quality of its products," says Susan King, the company's CFO. "Our new facility in Hacienda will play a vital role in our current expansion plans."

The company is a global provider of embedded electronic systems using an advanced technology known as "system-on-a-chip," or SoC.

SoC provides a programmable platform that integrates the functions of an entire computer in a single chip, including at least one processing element, such as a microprocessor or digital signal processor, embedded software, peripherals, and the means to interface to other components. Examples of SoC technology in action are digital cameras and miniature cell phones.

CPU Tech does not focus on consumer products, however. The company has overcome a number of technical obstacles and, in many cases, patented their solutions to specialize in low-volume production of small, low-power computers that can be used in fields such as avionics, industrial controls, medical electronics, weapons control systems, and other mission critical applications.

The company is unique in its ability to produce SoC-based systems that are compatible with other systems or software. This capability enables CPU Tech to use its SoC technology to modernize outdated computer systems in industrial and aerospace settings while retaining valuable proven software.

For example, the company is working with the U.S. Air Force to upgrade the radar systems used on many F-16 airplanes. CPU Tech's SoC technology will reduce the number of individual components in the radar system by 80 percent. Fewer components means a reduction in failure rates as well as weight, heat, and power savings, factors which the Air Force values highly.

In the past, CPU Tech has also licensed design and testing tools to other companies. IBM, National Semiconductor, and Texas Instruments have all used the company's microprocessor verification programs to improve and accelerate the process of chip design and testing.

Privately-owned, the company was founded in 1989 and moved to Pleasanton in 1995.