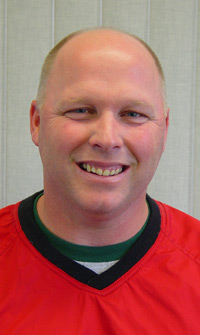 To gain the most insight into Mike Madden of Red Bear Property Management, the place to begin the conversation is to talk about his two passions.

"When I got married, I told my wife that these are the non-negotiables: I coach freshman football at Foothill High and I go over to Ireland for a week or two every year to play golf," he says.

It's not that Madden takes his business lightly. It's just that his attitude towards business and life, to a great degree is best illustrated in his approach to his other pursuits.

"Well, you don't have the right to be upset on the golf course, I'm sorry," he laughs.

The importance Madden places on studious preparation comes up again when discussing his coaching.

"The first thing we teach (our players) is accountability the fact that they're accountable for their actions," he says. "They haven't learned that yet. They're coming out of eighth grade and they're 14, but they're treated a lot of times like they're 11. Two years ago a bloody nose was a big deal; two years from now they're going to be driving a car. We kind of catch them right in between."

His philosophy is reflected in his attitude towards competition as well. He likes to win, as is true of everyone involved in sports, but doesn't view winning as a single, overriding goal.

" To win at all costs for winning's sake, that can get people into trouble," he notes. "I believe in preparing somebody to win; I think that's a valuable lesson. You study for your Spanish, you get an A. If you don't study, you get a B. Winning and losing is your report card."

If Madden sounds like a teacher, it's no coincidence.

"It's the teaching and the learning and just the whole environment that I've really fallen in love with. If you really wanted to dissect it, you could probably say that football is just the medium to interact with these kids. To be around that youthful energy, curiosity, and enthusiasm is just great."

Teaching runs in his family. His parents both started out as teachers, and although his dad, broadcaster John Madden, is better known for his work in other areas, their attitudes toward learning and personal accountability have undoubtedly been a strong influence. The family has lived in the Tri-Valley Area for decades.

"We moved here in 1967, when I was three," says Madden. "I spent five years back East going to school and a couple years in Los Angeles but basically I've been here my whole life."

He attended Pleasanton schools growing up and graduated from Foothill in 1982. His own familiarity with the area is part of what got him interested in real estate.

"Having seen the whole area develop and take off, you couldn't not be interested in the next real estate happening," he notes. "It was an interest and a hobby for my dad and, around 1990, he asked if I'd like to do it full time. He thought there were some real opportunities."

They started with two affordable housing projects downtown, creating over one hundred units for senior citizens.

"In a time when you pick up the paper and see that everybody's talking about the need for affordable housing, I like the fact that we've done it that makes me feel good."

From there, Madden headed up a number of projects in downtown Livermore.

"We brought two restaurants into downtown Livermore, we're bringing in a third, and that's kind of a fun thing," he says. "Five years ago in those same spots you could really fire a cannonball down the sidewalk, but now you see people coming out of the restaurants at nine o'clock at night. That's something I'm proud of."

His contribution to the revitalization of downtown Livermore continues with his latest project, a 20,000 square foot mixed use building at Livermore Avenue and First Street. This project will feature a restaurant and retail space on the ground floor with offices above.

"We've got a restaurant tenant lined up already," he says, with obvious excitement. "I think that's what turned downtown Pleasanton around all the restaurants bring foot traffic and now other things are viable because people go downtown to eat. That's kind of what we're trying to do in downtown Livermore."

The most recent project that Red Bear has completed, however, is in downtown Pleasanton: the Rose Hotel. Interestingly, his work in Livermore helped inspire it.

"I'm involved in the redevelopment program for downtown Livermore and there were a series of studies done which showed the need for an upscale hotel there," he says. "The other inspiration was the fact that, usually two or three times a year, my dad needs to bring people into town for one reason or another and every time for the last ten years, we had a heck of a time getting hotel rooms.

"Being in real estate, we would walk around thinking, 'You know, there's something to this hotel thing because you can never get a room in town.' My dad suggested the old St. Vincent de Paul building, which I had already purchased."

It turned out to be a perfect fit for the project.

"We took the next step and the site laid out perfectly. From there, it was like peeling an onion the more layers we went, we knew it was a viable thing and something we wanted to do."

The hotel was also an opportunity for Madden to express his own personal vision.

"Our mission all along was, 'Let's build a hotel that we would all like to stay in,'" he says. "It's the little things getting the shower head at the right height. I wasn't a qualified hotel designer but hey, can we get the shower head another foot higher?"

The rooms were built with business in mind.

"We've got big desks and high speed Internet access, and the outlets are at desk level so if you're recharging your thing you don't have to get on your hands and knees to get to an electrical outlet. It's right there, little things like that. 'Oh, somebody thought of that.' It was kind of a fun project."

Madden recognizes and values his ties to the area's history.

"When I was in junior high, my mom ran a saloon out of a building in Dublin that goes back well over a hundred years; my parents bought the old Bernal adobe a few years ago; we reopened the Rose Hotel. We've had a personal contact with a lot of history in the valley." And, with his continued participation in the area's redevelopment, Madden will have a personal contact with the area's future as well.