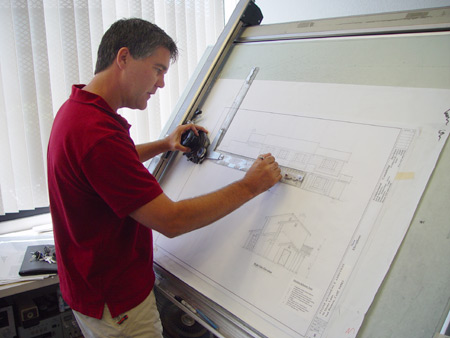 Roberts at work at his drafting table. 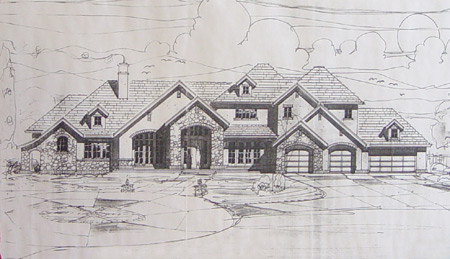 There aren't very many architects these days who still rely on a drafting table as one of their principal tools. As in so many other professions, everything is computerized now.

That's not the case with Jeff Roberts, however.

"I never got into computers until recently," he says. "I'm kind of a dinosaur. I'm waiting for it to go full circle, where people say, 'I want to have somebody actually draw it on a piece of paper with a pencil.'"

He works in a number of different styles, depending on the tastes of his clients.

"I try to be true to whatever architectural style I'm going to be using, to research it if necessary to create an historically accurate style with the right balance of elements and proportion," he says. "That's really what design is about, balance and proportion to create the house so that it gives you the feeling that you want it to convey."

The feeling that a home provides whether it's formal or casual, trendy or traditional can be influenced by architectural elements, Roberts says.

"You try to provide a detail or a material that can be seen as you go from the front door into the house, through the house and out the back door," he explains. "I think that's a nice way to give a person a sense of cohesive design throughout the house without it being too loud.

"It's almost as if there's an unconscious recognition of the design that gives you that zen peace of mind, where you don't know why but it makes you feel good."

He feels fortunate to be able to work on custom homes because they offer the opportunity to create unique designs for each project.

While his focus is on residential properties, he's also worked on other projects.

"In 1997, I had an opportunity to work on a golf course project in China," he says. "I helped them design their golf club building as well as the villas that were spread out along the course. The landscape architect was based in Australia, so I communicated with him via fax."