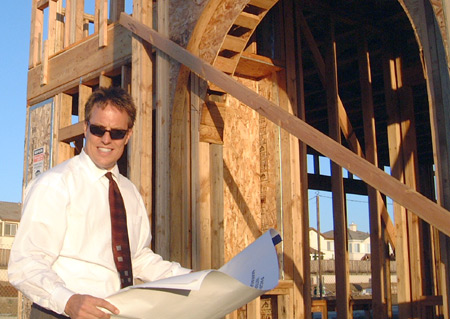 Kevin Weiss, president and CEO of the firm, at one of their clients' residential developments.

JMH Weiss, a civil engineering firm that was founded nearly 50 years ago in the South Bay, has opened its first branch office at 5674 Stoneridge Drive in Hacienda.

The company provides land development consulting for municipal and public works projects, master planning of private developments including design of roads, infrastructure, and subdivisions, as well as commercial and industrial business parks.

"Most firms do either residential or industrial work, where we have the experience and expertise to be able to do any type of land development activity, whether it's an office building, a 300-lot subdivision or a 15-building business park for Cisco," says Kevin Weiss, the company's president and CEO.

The company, which was founded as JMH Engineers in San Jose in 1956, became JMH Weiss 40 years later when Weiss purchased part, and later all, of the firm.

"During the first two decades, the firm built a reputation of excellence in the residential development area, specifically with custom lots in Santa Clara County," says Weiss. "Over the years, however, development expansions broadened the focus we have diversified experience for land development, civil engineeering, and consulting for a wider variety of properties."

The projects typically begin with a development feasibility analysis, which would determine the suitability of a site for a particular project.

"That would include an examination of available utilities and existing easements as well as topographic features," he says. "We would then work with an architect to lay out a building and site plan, which would be developed based on what we find in our feasibility study."

The building and site plan includes "the actual grading for the parking lots, where we'll put swales and other landscape features," and other items. These elements also go into the construction drawings, which detail those items as well as the sanitary sewer, the water lines, curbs and gutters, and the landscaping.

The company has opened the Pleasanton office with an eye towards increasing its presence both in the East Bay and the Central Valley.

"We've done a lot of projects in the East Bay and Livermore over the years, plus several projects in Manteca and Stockton," says Weiss. "We see Pleasanton as a stepping stone into those areas."

Currently, four people are employed in the Hacienda office, but they hope to have eight to ten employees here by the end of the year.