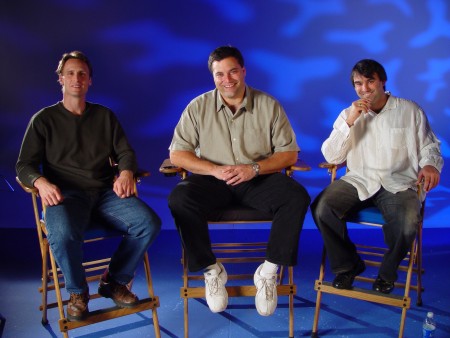 In thinking of television and movie production, the first location that pops into most peoples' mind is probably not the Tri-Valley area. If Joe Madden has his way, however, Pleasanton may soon rival locations to the south in the area of film, video, and game production. Madden is the president of Goal Line Productions, a full-service video, film, and sound production studio as well as a studio for hire that allows other production companies to use its facilities on a fee-based basis.

Goal Line has a unique production facility that was built around seven years ago, which is exceptionally large for a Northern California production studio. The stage alone is about 7,000 square feet in size. "We find that when people need to do certain things in a studio - build an airplane for example - they need a larger space to do that in than they can find elsewhere in Northern California, so they come here," says E.J. Heiser, Goal Line's director.

The studio also has facilities that support a wide range of production work as well as a staff that is experienced in the fine art of running a studio, from direction to writing to graphic arts and sound. "We definitely have a wide range of production work that happens in here -from music videos to television commercials to industrial production and trade show pieces," Heiser says. "There's a really creative production community in Northern California that can do some amazing work. There are a lot of really talented people around here."

Not surprisingly, Goal Line also works closely with Electronic Arts, developer of the John Madden series of video games. Legendary NFL broadcaster John Madden happens to be Joe's father. "We do video production work for Electronic Arts games, and we host meetings between Electronic Arts and John because John's very active in game development," Heiser says. "They come in and present the game as it's being developed during the year and John points out the things that need to be improved upon, as a coach should."

Goal Line has also done motion capture work for Electronic Arts games, where elite athletes have been brought into the studio wearing motion capture suits that have sensors on the major joints of their body. Cameras capture the movements of the athletes so that when the animations are created for the games, they are based on real athletic movements of athletes.

In the future, Goal Line intends to expand more into the area of feature films. "We're reading screenplays and looking for properties to develop," Heiser says. "That's sort of the long-term vision that Goal Line has as a production company: to expand into the realm of entertainment while continuing to support and provide services for the clients we've developed over the past eight years."