Windermere Properties of the East Bay Makes Hacienda its Home 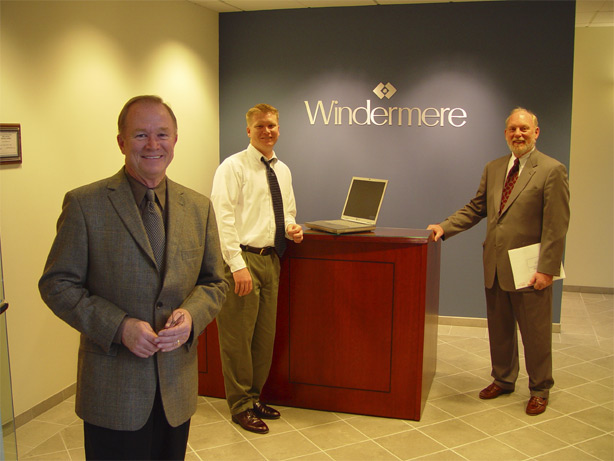 Windermere Real Estate has increased its growing California network by opening a facility at 4309 Hacienda Drive. Windermere Properties of the East Bay will be the seventh office opened in Northern California, and the first in the East Bay area of San Francisco. The 7,000 square foot space will accommodate up to 50 plus associates and commenced operations at the end of September 2003. Windermere Real Estate was founded in 1972 and now has more than 6,000 associates in 235 offices serving communities in Arizona, British Columbia, California, Idaho, Montana, Nevada, Oregon and Washington.

"Windermere is a network of broker/owners," says John Schieber owner of Windermere Real Estate of the East Bay. "After I left Prudential in December of 2001, I was aware of Windermere, and they became aware of the fact that I was no longer associated with a major company. So, we started talking and they wanted me to open up here in the East Bay where they had no presence," he says." In meeting with and talking to everyone involved in Windermere, it turned out that our culture and beliefs in how real estate should be practiced were exactly the same. I'm a non-competing broker. I'm not out there selling real estate against my agents. Everything that's done is done in support of my sales associates."

Schieber has worked in the real estate industry for the past thirty years, during which time he has helped create several real estate entities. During the 1990s he held a senior leadership role in the growth of Dutra Realty Enterprises into the number one real estate company in the East Bay. In May of 1999, Prudential California Realty purchased Dutra Realty and Schieber served as the General Sales Manager, responsible for 32 Bay Area offices and 1,200 sales associates. Late in 2000, Schieber was assigned the responsibility of working with all 112 Prudential offices as Director of Network Services in Northern California. He also has a history of involvement in the development of Hacienda, having played a large part in the building of Dutra Plaza at Stoneridge and Chabot, erecting the two mirrored buildings that form the courtyard there.

"My sales associates and I have a partnership. I'm extremely interested in their success and they're interested in mine. That' what makes us different." Schieber envisions office locations in both counties of the East Bay including the opening of offices in San Ramon, Walnut Creek, and Alameda. Other local Windermere offices in the area run by different broker/owners are in Carmel, Los Gatos, Saratoga, San Jose, Santa Rosa, and Salinas. "Though the Windermere offices may be owned by different people, we work together as a network," Schieber says. "It's not a franchise like some other real estate organizations. This is my first Windermere office, and I'm excited at the prospect of expanding in the region."