John MacDougall Fashions a Business From a Bazaar Experience 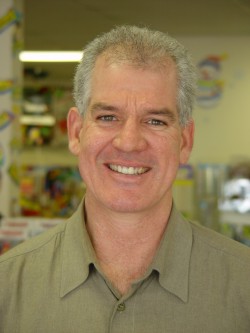 Life experiences contribute a lot to who people are and what they do. The interesting part is that no two people are exactly alike because they have taken a slightly different route in life. John MacDougall, owner of the Golden Apple Learning Store at 4807 Hopyard Road here in Hacienda, has walked an interesting path in life, which led him to run an interesting business.

MacDougall cites his family background as a chief factor in deciding the type of business he ended up running. "I'm a product of my parents because my father was a salesman and my mother was a teacher. That's probably why I'm doing what I do, because I sell things that are educational. My father was a big influence in learning how to sell things."

Other life experiences taught MacDougall different lessons in how to run a business. MacDougall spent about a year and a half of his young adult life traveling the world and took jobs in many different exotic locales. "I pretty much sang for my supper," he says. "I worked as a waiter in Instanbul for an extended period and I worked as a house painter in Paris. I was really interested in the way people do business in a lot of different places, especially Istanbul." While working in Istanbul, MacDougall had his afternoons off and set out to learn to navigate the city's Grand Bazaar, which is a gigantic shopping area. Here is where he says he learned a number of business lessons.

"It's really an interesting business environment," he says. "In the Grand Bazaar all of the people that are in a certain trade are in the same area. It's not like here, where if I'm going to have a toy store, I'm going to have an exclusive with my landlord to have the only toy store in the center. The tradition here is that you'll go out of business if you have another toy store anywhere near you. In the Grand Bazaar, everybody in a given field is together. So you distinguish yourself by being better. We have really tried to do that with Golden Apple. The person that is doing the best job should get your business-not the person who's walled themselves off from competition."

MacDougall is a big fan of competition. "It keeps us honest in what we do," he says. "I run into other small business owners who feel exactly the opposite way. They're very threatened by any competitor that comes into their area. I like having competitors because I think it makes us think about what we're doing. That's kind of going back to what I learned in Istanbul. It keeps you focused on doing the best job you can do."

In contrast, he keeps a bit of a European mentality about when business should be conducted. MacDougall thinks that while dedication is important, it's also important to value other things in life.

"Something that I learned during my world traveling is that I am a 'work to live' kind of person. You see that all over Europe and it's the reason that stores are closed on holidays. Do we need to make a sign saying that we'll be closed on Thanksgiving? Anyone who comes to the door should know that a store should be closed on a holiday."

MacDougall's background in education has also been an asset in business. He studied Western Civilizations at UC Santa Cruz, which required him to learn dead languages. In addition, he also earned a degree in Creative Writing. After finishing college, he took a job teaching Latin. His store, however, is now his foothold in the world of education, and he feels as though he's making a difference.

"Right now there's a big drive for standards-which is good-but it's also squeezing the life out of schools a little bit. If that's all they're talking about all day in school, the kids are liable to get bored, so we see a lot of parents coming in for things to make thinking more fun, like creating activities and logic puzzles-the kind of things that the schools don't have time to do because they're sticking to just the facts. Those kind of things pop up all the time and make for an interesting day-to-day experience at the store, because we always have to think about new and interesting approaches to education."

Golden Apple sells educational supplies and toys for both parents and teachers. "We do something that's very different," MacDougall says. "We sell things to help people learn. We had to come up with a way to let people know that we weren't just a 'teacher store,' because when we started out, our first experience was that there were a lot of parents who would come and duck their head in the door and say 'is it OK if I come in?' because they just felt like parents weren't welcome."

MacDougall has tried his best to make Golden Apple a little different and a little more fun. "When I was a kid, my mom was a teacher and I wouldn't go into the 'teacher's store' because I thought it was the most boring place on earth," he says. "I would sit in the car or refuse to go along. You go to school all day. Why would you want to go after school to a store where they sold the same stuff your teachers have? We really tried to come up with a term that didn't say parent/teacher store or teacher store. So we hit on 'Learning Store' as open-ended enough that we could sell almost anything we wanted without being categorized."

MacDougall can frequently be found at the store, helping parents and teachers find the educational materials they need or even the most appropriate toys. However, if you don't see MacDougall himself in the store, you can rely on his competent staff, many of whom have teaching backgrounds themselves.

Golden Apple sells items like the decorations that teachers put up on their classroom walls and resource materials that give them educational ideas. "We don't sell text books," MacDougall says. "But if a teacher is instructing students about China, they will want to have a couple of books that give them activities, crafts, and projects to make the lessons fun." Golden Apple also sells what MacDougall terms "traditional toys" like wooden trains. "They were fun 20 years ago and they haven't changed a bit," he says.

John MacDougall is certainly a product of his experiences and his background, just like anyone else. However, because his experiences are just a little bit different, so is his business. With his competitive spirit and dedication to education, the Golden Apple Learning Store is a valuable community service as well as being MacDougall's foothold in the business world.