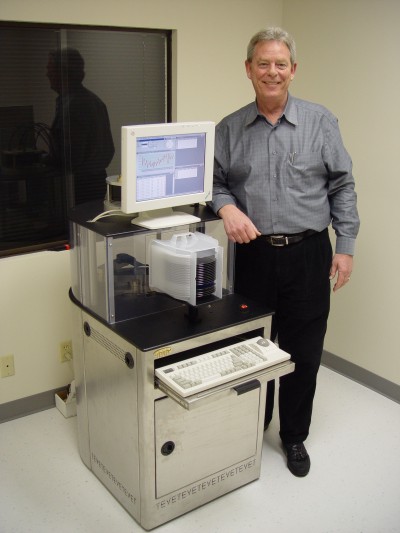 Ralph Mason, Tevet's global sales manager, stands with one of the company's products.

Tevet Process Control Technologies was established in 1999 in Israel. The founders of the company all came from the semiconductor industry with extensive knowledge and experience in semiconductor process technology. "The top four or five people in the company all together have over a hundred years of experience in semiconductor processing and technology," says Yuval Wasserman, President of Tevet Process Control Technologies. "The idea behind the company came from the fact that the founders realized that process control in the semiconductor industry was not very automatic. It was very 'human dependent' and a lot of engineering time was spent running tests to qualify the machines for mass production."

Tevet's In-Situ Thickness Measurement System ensures that the films deposited on silicon wafers-like those used to make such products as the main processors for computers-had the right thickness. Traditionally, to make sure that the wafers were being produced correctly, the manufacturers would occasionally do a test run and measure the thickness of the film on the wafers. If the thickness of the film was within the right specifications, they would keep running production. If it was not correct, they would have to figure out what went wrong with the processing tool. In the process, semiconductor manufacturers would frequently have to waste large amounts of silicon when they finally discovered a problem, throwing out the material that was manufactured preceding the time they found a problem.

Tevet's system involves using an integrated sensor that is hooked onto a silicon wafer production machine to automatically measure the thickness of the thin films deposited on every product wafer without interfering in the production process. In effect, it attaches to existing microprocessor production tools to keep the manufacturers from wasting materials and to ensure that the chips are made correctly.

"We have our business operation in the Bay Area to shorten the distance between us and our customers," Wasserman says. "We sell in Asia, in Europe, and in the U.S. Our location in Israel is very attractive for research and development and the Bay Area is very important in promoting our business. We found dealing with the Business Center here very pleasant. We enjoy the services here and the surroundings. It's very conducive for start up high-tech companies."

Tevet currently has its measurement system installed in three "beta" test sites-one of them with an equipment manufacturer and two in semiconductor fabrication facilities. The company's exuberance brings back images of the glory days of high tech startups. "We're having a lot of fun," Wasserman says. "Starting with an idea, taking technology that was proven in a lab, developing it, and making a business out of is exciting."