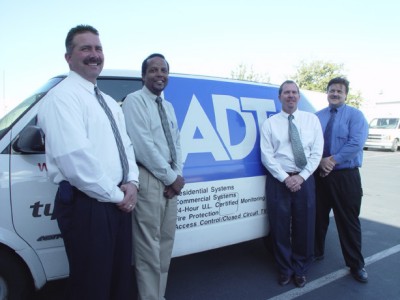 Celebrating its 129th anniversary, ADT (American District Telegraph) Security Services is the nation's oldest and largest provider of electronic security services with six million commercial, government and residential customers throughout the United States. The San Francisco Bay area district of ADT has 300 people of which 150 are assigned to the Pleasanton location. "The office will be the workplace for around 60 people at one time," says Leo Brancheau, ADT group general manager for Northern California. "There may be a few times per year when we will have all 150 employees in that location." The Northern California group of ADT has 600 employees and offices in San Jose, San Bruno, Sacramento, Modesto, Fresno, and Bakersfield. In addition to normal branch operations, this location will house several national account team members.

Most of the personnel at ADT's Pleasanton facility will perform office support functions. The service and installation technicians who work in the field will also use it as a home base for materials and office interaction as needed. "This office serves as a central location for Northern California and provides the most reasonable location to allow for weekly and bi-weekly meetings of the managers and staff from the other six offices in Northern California," Brancheau says. "It evens out travel between them and allows for us to cover the gap between the San Francisco area and Modesto area more efficiently."

ADT Security Systems is a subsidiary of Tyco International Limited, which operates in all 50 U.S. states and over 100 countries throughout the world. Tyco fills a wide range of the many diversified needs of businesses and governments, educational, medical institutions, and commercial industries ranging from food to automobiles. Its products range from everyday brand names like ADT and Sentry, to highly specialized medical, technical, and security products such as U.S. Surgical. ADT was formed in 1874 through the affiliation of 57 district telegraph delivery companies. It was acquired by Tyco International in 1998.