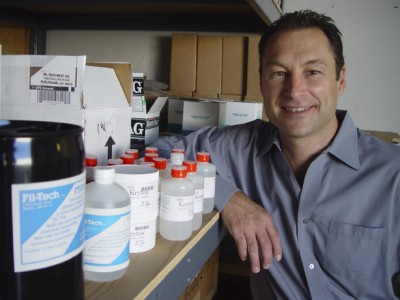 Doug Becker, president of Fil-Tech West, keeps a variety of supplies on hand to meet the needs of his company's many customers.

If you've ever seen a scientist reaching into a sealed box via attached rubber gloves to avoid becoming exposed to a dangerous substance, you may wonder where someone would procure such a device. For glove boxes and many other interesting devices used by the scientific, academic, and manufacturing industries, Fil-Tech is the place to call.

"Our customers range from semiconductor manufacturers to universities to coating laboratories that coat everything from sunglasses to the inside of light bulbs," says Doug Becker, owner and founder of Fil-Tech. "Half of what we do is sales rep and the other half of our business is selling consumables for those types of industries. We sell gauges that measure vacuum and we sell a lot of fluids for mechanical pumps." Locally, Fil-Tech counts Lawrence Livermore Labs, UC Berkeley, Process Materials, Semicore, and System Control Technology among its customers.

Becker started Fil-Tech in Burlingame back in 1986 and moved the company's operations to 5673 West Las Positas Blvd. in Hacienda last December. Becker understands that the general public often doesn't comprehend what his business is or exactly how the gadgets and fluids he sells are used. "I would have to say that the same way your copier needs ink and paper, these machines need parts and supplies. So we sell replacement parts and consumable items to high-tech companies."

Fil-Tech's products include quartz crystals and hardware, electron beam gun parts, ion source parts, crucibles, Si02 and deposition materials, silicone diffusion pump fluids, Krytox and other mechanical pump fluids, oil and exhaust filters, leak detector filaments, and ionization and thermocouple gauge tubes.The products have a wide range of distinctive applications. Consider the quartz crystals. "When you do coatings on things like sunglasses, to know how thick the coating is, you basically put this crystal that looks like a dime on the machine." Becker says. "As the coating builds up, the frequency through that crystal changes, which is how they measure the coating's thickness. Larger companies make the machines and then we sell the crystals."

Another example of a product sold by Fil-Tech is something called a magnetron. "A magnetron is basically a bunch of magnets. You put it inside a vacuum and you add Argon atoms instead of oxygen or air. When you send an electric current into the vacuum, the Argon atoms are ionized and are literally pulled towards the magnets. Then you put your target material into the vacuum, which can be anything from silicon to copper. That's how manufacturers coat CDs."

Fil-Tech's product line may be pretty heady stuff for many people. However, if you need the company's wares, there are few other resources like it.