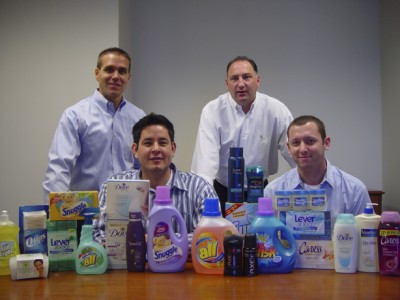 When you buy a bar of soap or other product at your local grocery store, you probably don't think much about how it got on the store's shelf in the first place. After manufacture, that product takes a fairly long trip before it gets to your home and has many people representing it to make sure it gets where it belongs. Unilever is a company that makes a wide variety of products available for our personal consumption, ranging from shampoo, toothpaste, teas, ice cream, oils, and spreads. Its new sales office in Hacienda were established to help the company to get its products on the store shelves and into your home.

Unilever was created in 1930 when the British soapmaker Lever Brothers merged with the Dutch margarine producer, Margarine Unie. Both companies were competing for the same raw materials, both were involved in large-scale marketing of household products and both used similar distribution channels. Between them, they had operations in over 40 countries. Employing 265,000 people, Unilever has two parent companies: Unilever NV and Unilever PLC, which, despite being separate businesses, operate as a single unit with the same board of directors. Unilever's corporate centers are in London and Rotterdam. The company's products include brand names like Knorr, Hellmann's, Lipton, and Dove.

"We're a $52 billion dollar company that operates in the United States, sells to every major supermarket, mass merchandiser, drug outlet, and clubs like Costco," says Scott Antony, director of sales for the team in Hacienda. "We're in 1,500 countries, we represent thousands of products, and we're one of the largest consumer goods companies in the world."

Unilever's new office in Hacienda was established in March 2003 to serve one of its larger customers, Safeway. "The reason we started a team up here is because of Safeway," Antony says. "Safeway centralized their organization and asked the consumer goods manufacturers who call on them to set up offices here to service them," The Unilever office in Hacienda is part of the company's Home and Personal Care division. Some of the brands they represent include Dove products, Snuggle fabric softener, Q-Tips, Vaseline, Suave, and Mentadent toothpaste. The facility on Hacienda Drive is a sales office for the 12 local members of the Safeway team. The products themselves are shipped from different distribution centers across the country.

Nearly all of the Unilever employees in Pleasanton relocated from Costa Mesa, in Southern California. "Everybody came here to become a member of the Safeway team," Antony says. "We, as a company, decided to move here to Pleasanton to serve our customer here." Antony seems pleased with the move. "It's a great place to live, a great place to do business. Hacienda is very professional, upscale, and a nice environment in which to work."