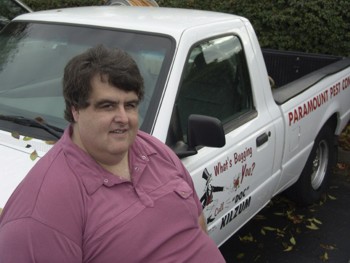 Michael Alexander, president of Paramount, makes sure his clients get all the help they need with pests like ants, termites, and mice.

Despite the best efforts of home and business owners, the appearance of pesky pests such as mice and insects in a building is never a situation that can be completely avoided. Whatever your pest problem might be, Paramount Pest Control, at 5673 W. Las Positas, is ready, willing, and able to do what it takes to keep the intruders at bay.

"We cover all aspects of pest control, which includes removing ants, mice, roaches, and termites," says Michael Alexander, Paramount's president. "We do both commercial and residential work. About 60 percent of our clients are businesses, and we service the entire East Bay." Currently, Paramount has nine employees and has in the area of 1,000 clients, many of whom use the company's services on a contractual, ongoing basis. Some of Paramount's customers include Burlington Northern Santa Fe Railway, Union Pacific Railroad, and PG&E, along with numerous small businesses in the area. The company also provides one-time services to customers.

Paramount was started in Southern California in 1935 by Alexander's grandfather. Originally, a large part of Paramount's business was done for Southern Pacific Railroad. This prompted the company to move to the East Bay in the 1940s because it was a more centralized location from which to serve this large client. Eventually, the company grew to the point where it had operations in four western states. However, when Paramount's founder retired, he sold all of the locations except for the one in the East Bay, where he ran the company until the early 1970s. Four years ago, Paramount moved to the Tri-Valley and, in May 2004, the company moved into its Hacienda location.

Paramount is a member of the Pest Control Operators of California, a state association that adheres to specified standards and a code of ethics. The company is also licensed by the California Structural Pest Control Board (SPCB), an organization that was established to protect and benefit the public by regulating the structural pest control industry. On a historical note, Paramount's founder was involved in organizing and establishing the SPCB on a state level at its inception - right around the time that Paramount Pest Control was born.

While some people aspire to helm huge companies, Alexander likes running a small family business. "We're not trying to be the world's largest pest control company or anything like that," he says. "We're just trying to provide high-quality service at a reasonable price. We'd rather take care of our customers the right way than to take on more than we can handle and provide lower quality service."