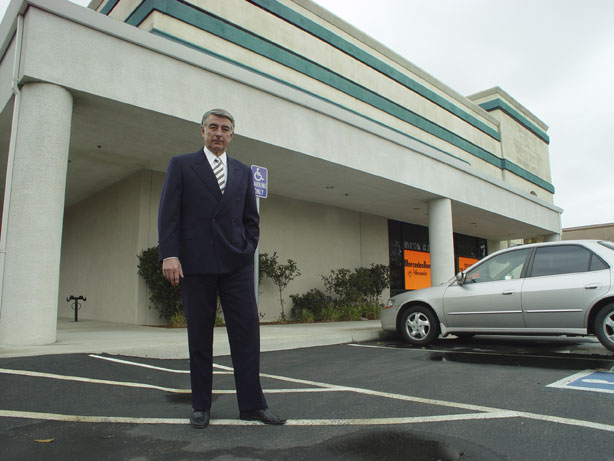 By George Walsh Special to NETWORK

Mercedes Benz of Pleasanton, a long-time Hacienda investor and tenant, is progressing with an expansion that includes the purchase of a building at 5871 Owens Drive. The acquisition will increase the size of the company's operation by 12,911 square feet. The company's current facility, which will remain in operation at 5885 Owens Drive encompasses 28,500 square feet over 3.17 acres, making it one of the largest Mercedes Benz dealerships in Northern California.

"We started out in 1987 with 14 employees and we're up to 85 employees now," says Uwe Waizenegger, president and owner of Mercedes Benz of Pleasanton. "Business has been very good and we're running two shifts right now that go all the way to 12:30 in the morning." Waizenegger sees the current expansion as a necessity to serve the company's customers. "Among other things, I realized that I needed to expand my service department. So, the new expansion includes converting the new building into a showroom for eight to ten pre-owned cars and will include also include about 12 service bays for reconditioning vehicles," he says.

Waizenegger says that the expansion of his business has directly correlated to the expansion of the Tri-Valley. " It's probably the fastest growing market for Mercedes Benz in the Bay Area. When we first started here in August of 1987, there wasn't much here. Since then, the housing market, as well as the business market, has grown tremendously."

As far as what to expect from Mercedes Benz in the future, Waizenegger is very excited. "We're going to have an explosion of new models entering the market next year with five or six new vehicles to choose from." The new expansion will also give customers a larger selection of previously owned vehicles to consider.

Mercedes Benz of Pleasanton's parent company has been in business for more than 100 years, with the name "Mercedes" coming from the name of the daughter of one of the company's founder's, Emil Jellinek. Daimler-Motoren-Gesellschaft (DMG) delivered its first Mercedes on December 22 1900. Mercedes Benz of Pleasanton continues the tradition by being a family owned and run business and Waizenegger expects that his son Chris, who is currently the general service manager, will take over running the entire operation at some point in the future. "We're third generation Mercedes," he says. "My father came over to establish the dealer network in the United Stated in 1956. He ended up being vice president for Mercedes Benz of North America. I've been around Mercedes since I was six years old and expect to be around them for a long time."