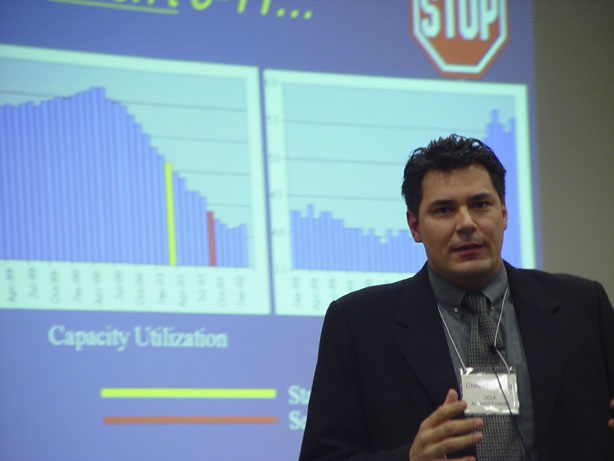 Chris Thornberg, an economist with the UCLA Anderson Forecast, led off the Tri-Valley Business Council's annual meeting with the latest analysis of the national and regional economic climate. 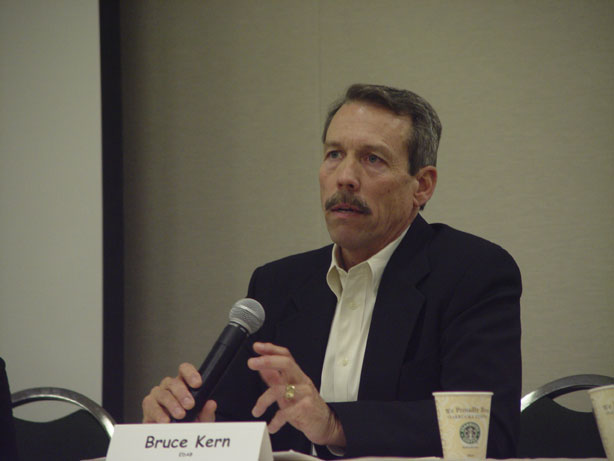 Bruce Kern of EDAB offered his perspective on the Tri-Valley's economic health, gained over 25-plus years of work in the East Bay. 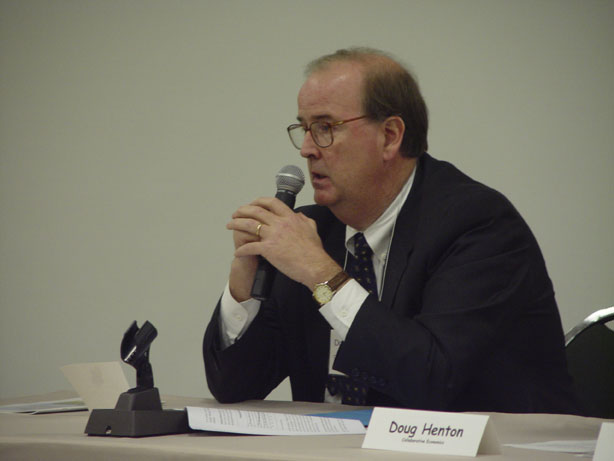 Economist and author Doug Henton noted that the Bay Area and Tri-Valley are an innovation-based economy.

How has the Tri-Valley's economy fared over the past few years? How does that compare to neighboring regions? Has the population in the area grown? Are there any recognizable trends in the types of jobs held by local residents? What can businesses do to take advantage of current and coming economic cycles?

These are just some of the questions that are addressed in The Tri-Valley Economic Report, a new study published by the Tri-Valley Business Council, a group which represents local companies in regional issues. The paper was distributed on January 28 at the CarrAmerica Conference Center in Hacienda as part of the TVBC's annual meeting, where members in attendance also had the opportunity to ask questions of a number of experts who were on hand.

One of the report's key findings shows that the area's diverse economic base has minimized the effects of the recent downturn in the economy. The UCLA Anderson Forecast has noted that the greater East Bay avoided the worst of the 2001 recession because of its existing core of retailers, financial service providers, food processors, and vehicle manufacturers.

The Tri-Valley reflects a similar dynamic. While a number of tech companies sought local sites during the late 90's, which led to the development of millions of square feet of new space in the region, the study reports that the recession arrived "before the major high tech companies and others could establish a large enough boom to create a substantial bust." The area benefited from the growth caused by the tech boom but the Tri-Valley economy's broad base has enabled it to weather the downturn more easily than some neighboring regions.

That trait is reflected in the employment numbers as well. While the San Francisco-San Jose-Oakland Consolidated Metropolitan Statistical Area has seen the number of existing jobs drop by as much as 7.5 percent since the first quarter of 2001, the Tri-Valley never lost even 2 percent of existing jobs since that time. In fact, by the second quarter of 2002, the Tri-Valley had restored 99.9 percent of the employment base it had at the beginning of 2001, a much higher figure than the 7 percent loss seen in the region as a whole.

The TVBC report also breaks down the employment data into North American Industry Classification System categories such as "Construction," "Trade, Transportation and Utilities," "Financial Activities," and "Professional and Business Services." Over 40 percent of Tri-Valley employers fall within "Professional and Business Services" and "Trade, Transportation and Utilities," while an additional 49 percent of businesses are classified in "Financial Activities," "Education and Health Services," "Construction," "Leisure and Hospitality," and "Other Services."

It is in taking these figures a few more steps where the importance of the "Professional and Business Services" sector begins to emerge. The sector is made up of three different categories: Professional, Scientific, and Technical Services, which includes businesses such as law firms, payroll services, architectural and engineering firms, consulting services, research firms, ad agencies, and other services; Management of Companies and Enterprises, usually defined as corporate headquarters or management offices; and Administrative and Support and Waste Management and Remediation Services, which consists of establishments that perform routine support activities for the day-to-day operations of other organizations. In regards to the Tri-Valley, 57.2% of the jobs in this sector fall under the category of "Professional Scientific and Technical Services," which includes highly technical activities such as scientific research and engineering.

Among the 7,562 employers in the Tri-Valley (as measured in the second quarter of 2002), 27 of them employed 500 or more workers and eight of those large employers are classified in the "Professional and Business Services" category. That sector comprises 22 percent of all area companies, 26 percent of area employment (almost 40,000 jobs), and almost 29 percent of area wages - over $2.4 billion annually, based on the second quarter of 2002. "Professional and Business Services" is the largest group in each of those categories.

It's easy to see the relative importance of those businesses when comparing the number of jobs in that arena in the Tri-Valley to those in the greater Bay Area and to California as a whole. Nearly one in four jobs in the area are in the "Professional and Business Services" sector, a figure which is 40 percent higher than the San Francisco - San Jose - Oakland CMSA and over 60 percent higher than the state.

The figures are similar in the "Information" sector, where the Tri-Valley's number of companies - nearly 10 percent of the region's total - is over twice the percentage in the greater Bay Area or the state. The enterprises grouped in this sector center around publishing, including software and traditional publishing, as well as telecommunications and broadcasting.

The data that has been gathered in the production of The Tri-Valley Economic Report gives a detailed picture of the area's economy as it has changed over the last few years. What happens when that data is analyzed in the context of broader economic trends or projected into the future?

That was the topic of discussion for Doug Henton and Bruce Kern - president of Collaborative Economics and executive director of the Economic Development Alliance for Business (EDAB), respectively - at the TVBC's annual meeting. There's a lot of experience behind their words. Henton has more than 30 years of experience in economic and community development at the national, state, regional, and local levels and serves as national coordinator for the John W. Gardner Academy of the Alliance for Regional Stewardship, a national network of leaders from over 40 regions. Kern is the executive director of the Economic Development Alliance for Business (EDAB), a public/private partnership serving the East Bay with over 600 member organizations which is responsible for retention and attraction of business, workforce development, promoting sustainable development.

"As we go through these numbers and look at some of the unemployment rates and the ups and downs, what's important to me is the underlying skills base of the region, and how will the region adapt as it goes forward into the future," explained Henton. "One of the interesting things about the Bay Area, about Silicon Valley, about the Tri-Valley, is that it really is an innovation-based economy. We really aren't operating as a commodity-based economy - there are other regions of the country that operate on the basis of commodities. We have to operate on the cutting edge of innovation and a lot of people are asking the question, as we begin to move out of this period of time, what will be the next industry that will drive? What will be the next economy? And what will be the areas that are going to be the areas of future growth? And I think the region, because of the strong professional, technical, and science base, is well positioned."

Kern also noted that the Tri-Valley is well positioned to take advantage of the next wave.

"I've had the opportunity over the last 25 years to attract businesses into this area and worked with Joe Callahan in bringing in some of the first businesses to Hacienda," he began. "From my standpoint, the Tri-Valley is extremely competitive and it's a great address for business. I think that it has been a terrific place for investment and as we work with investors both domestically and internationally, the Tri-Valley is always the top of the list. It's a great location; it emerged in the 90s as a headquarters alternative, which needs to be underscored."

He also noted that there were some important challenges that needed to be addressed.

"We have to be concerned about the cost of housing," he said. "Where can a young family buy a house in the Tri-Valley? I think that's an extreme challenge that we have and it's why we have difficulty in retaining mid-level jobs or emerging low professional employment, and that is going to effect our long-term competitive outlook."

The region's infrastructure would also play an important role in future developments, he added. "Running right through the heart of this valley happens to be 580 and 680. These are very fragile, stressed roadways. We have to work as a community to deal with this."

Henton echoed those thoughts and added that the business community could play a key role in setting the direction for the coming years.

"I think the boom, the Internet bubble, made us a bit complacent but groups have come together over the last couple years and begun to ask some fundamental questions again. What are the key competitiveness factors? What cost and infrastructure investments are necessary? What is the vision that we need to have to think about the jobs and the industries of the future, and how do we begin to build on that? We're going to have to have a global, competitive platform to take advantage of our export link. We're going to have to take advantage of our technology strengths and not accept the fact that they're going to just happen by magic."

Ultimately, both men pointed to a need for broad-based action in order to secure the Tri-Valley's future.

"If you look at these trends, you'll see there are boom and bust cycles but there are underlying waves, and the question is can we be ready to catch the next wave of innovation and really make it happen?" said Kern. "It's times like this that you can really rally and bring people together to talk about a plan for the future and how we build for the next phase."

"I think that we have to be agile and enterprising," added Kern. "We have to realize that it's not one organization but all of us working together - business, government, and the community - and only through that will we be successful."

For additional information on the Tri-Valley Business Council or on The Tri-Valley Economic Report, contact Tom O'Malley at (925) 890-1892 or via e-mail at tjomalley1@aol.com . The group's web site is located at www.trivalley.org .