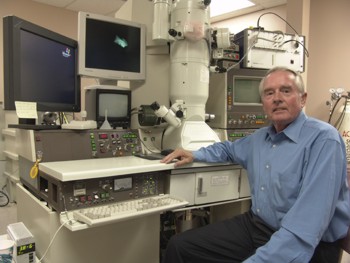 Gatan's president and CEO Bob Buchanan shows an electron microscope which has been fitted with Gatan's components.

Nearly every device that we use in our daily lives or professions can be enhanced in some way. Whether it's a faster processor for your home computer or an electronic device that makes the anti-lock brakes on your car safer, it's likely that some company somewhere is working hard to squeeze that extra bit of performance out of our modern-day tools. In the world of electron microscopes, one of these companies is Gatan Inc., at 5933 Coronado Lane.

Founded in 1964, Gatan, Inc. is a manufacturer of instrumentation and software used to enhance and extend the operation and performance of electron microscopes. Gatan's products, which are compatible with all brands of electron microscopes, cover the entire range of the analytical process from specimen preparation and manipulation to imaging and analysis. The company's customer base spans end users of analytical instrumentation typically found in industrial, governmental, and academic laboratories. The applications addressed by these scientists and researchers include metallurgy, semiconductors, electronics, biological science, new materials research, and biotechnology.

The accessory equipment Gatan makes includes CCD (charged-coupled device) cameras (which replace film by registering tiny electric charges on silicon chips); specimen preparation equipment used in transmission and scanning electron microscopes; and specimen holders for TENs that allow users to heat, cool, stretch, or tilt specimens depending on the model. In addition, Gatan makes what are known as electron energy loss spectrometers for SENs that are used to provide elemental information about samples in specific parts of it, as well as enough other high-end add-ons for both SENs and TENs to boggle the minds of most laymen. These tools, however, are of invaluable use to those who need them for their work.

"Our customers are mainly universities, government research facilities, and industrial companies in areas like the semiconductor industry. Our products basically address material science and biological applications," Buchanan says. However, in the ever-shrinking world of electrical components, these devices will play an exciting role. "Electron microscopes now allow people to look at atoms, which is important as we move toward nanotechnology," Buchanan says. Nanotechnology is the branch of engineering that deals with things smaller than 100 nanometers. (Nanometers are one billionth of a meter in size.)

Gatan is part of a larger company called Roper Industries that is traded on the NYSE. Gatan's headquarters, including research and development and sales and marketing, are located in Hacienda. The manufacturing operation is located in Warrendale, Penn., with other development operations in Oxford, England and offices and dealers throughout the world. Currently, Gatan has 60 employees at Hacienda and a total of 200 worldwide.