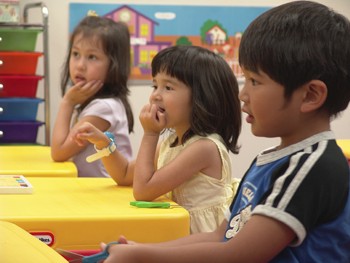 Sakura Gakuen teaches Japanese to both children and adults in its Hacienda classrooms.

In today's cultural melting pot, the ability to speak more than one language can be a tremendous asset to communication, both socially and in business. Different people, however, have different needs when it comes to learning another language. While some grow up in multilingual families, others need to start from scratch to gain the communication skills they seek. If speaking both English and Japanese is your goal, Sakura Gakuen, at 5980 Stoneridge Drive, may be of assistance, regardless of your skill set.

Sakura Gakuen teaches students that range from preschoolers to adults. Most of the classes are in the daytime Monday through Friday, with the exception of a new adult class from 7:00 p.m. to 9:00 p.m. Adult classes may soon be taught on Saturdays as well, however, if the demand presents itself. The school, which opened in March of this year, currently has between 30 to 35 students. Its five teachers are certified in Japanese language instruction and have as much as 30 years of experience.

"We have two different types of classes," says Sachi Monastiero, co-owner of Sakura Gakuen. "One class is for students who can already understand Japanese because one of their parents is Japanese. At home, they start out speaking English and Japanese, but because they start going to elementary school and their friends and teachers speak English, they sometimes forget their second language. In those classes, the teacher will only speak Japanese in the classroom. Some students don't speak any Japanese or only know a few words or phrases. In those classes, the teacher will speak both Japanese and English to teach them Japanese. We want to work with everybody and we know we can't mix everyone together."

The school can also be an aid to those who come to the U.S. for business or other reasons and bring their children with them. The children initially may not know any English but a few years later, when they return to Japan, they may have trouble with their native language. "Those students really have to keep up their Japanese language skills," Monastiero says. "Otherwise, they may have a hard time when they go back to Japan to attend school. Sometimes, they go to schools once a week where they are taught using text books that are used in the schools in Japan, but the learning pace of attending classes only once a week is so difficult that some students can't keep up with the teachers and eventually drop out."

In addition to learning the language, the students learn to read and write the various types of Japanese characters and are also exposed to other parts of Japanese culture such as calligraphy and traditional songs. In fact, on entering the classroom, students need to remove their street shoes - just as they would in a Japanese home or school.