Over its Six-Year History, the Hacienda Index Reflects the Success of Park Companies 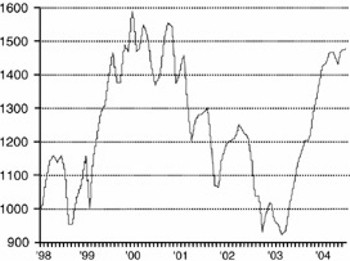 The Hacienda Index has reflected overall market performance since its launch in January, 1998.What's the best way to follow the success of companies in Hacienda? One way is to observe the progress of the Hacienda Index, a monthly feature of Hacienda Network which tracks the value of the publicly-traded stocks from Hacienda companies.

More than six years have passed since the January, 1998 debut of the Index and, while its creator Marion Steward says that the Index was created strictly for general interest, the Index has provided an interesting reflection of the publicly-owned companies in the park.

"We said, 'Wouldn't it be fun to see what would happen if somebody had invested in the companies in Hacienda? What would that look like?'" she explains. With that goal in mind, Steward sought an appropriate method for creating the park's new financial yardstick.

By using the cash value of each stock, she created what is called a dollar-weighted average.

"For instance, you may have a company that has a very low share price and if they were to double their share price and go from $4 to $8, for example, that would be a tremendous gain for them, a 100 percent gain. However, on the Index we only see it as a $4.00 per share gain. If a different company trades at $100 per share and their stock goes up $4.00, it's only a four percent gain for that company. To put it another way, a large gain in a low-priced stock could be offset by a smaller loss in a high-priced one."

This is the same technique used to create indices like the Dow Jones or the S&P 500. While those may be the best known, she explains that there are plenty of money managers around the country using an index to follow a specific business sector.

"Organizations will create indices for whatever kind of climate they're looking to gauge," she says. "For example, states can have their own index. Some organizations, frequently a brokerage firm or media company, will create an index to gauge the health of a particular region or industry. Almost anybody can create an index and not all of them are widely known or widely published. The Hacienda Index is really more of a fun way to look at the businesses in the park because the roster of companies changes so often. It's not something you can go to your broker and buy. You can see trends but the information is more anecdotal."

That said, the Hacienda Index has indeed reflected the larger trends in the market quite accurately so far. The Index hit a high of 1587.86 in January, 2000, two months prior to what is generally recognized as the top of the market. Similarly, the Index hit its lowest point in March of 2003 at 922.78, again reflecting a date that is seen by some financial experts as the market's bottom. The Hacienda Index stands at 1476.01 this month, up 60 percent in the 16 months that have passed since the low.

Steward says that she is a bit surprised that the Index hasn't returned to its previous high, but also offers an explanation. The Index is fundamentally affected by changes in the composition of businesses within the park.

"You can't really compare the Hacienda Index to one of the better known indices because there's a lot more turnover than you would see in these other indexes like the Dow Jones or the S&P 500."

The Hacienda Index may just be for fun, but as she notes, "it has given a pretty good indication as to the business climate in Hacienda."