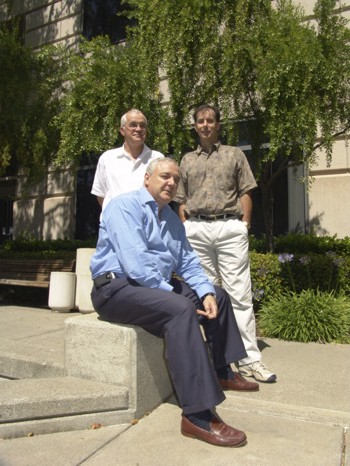 Media Lario, a manufacturer of high accuracy optical components and systems, opened a new location at 4309 Hacienda Dr. last month. Media Lario's optical components have been used in numerous applications in the areas of scientific equipment for X-ray, optical, and radio frequency applications used by the global space and defense sector. The company achieved technological success with the manufacturing and integration of the X-ray telescopes for the European Space Agency's XMM-Newton and NASA Swift space-borne observatories. The company has also had success in developing special telescopes for "free space" communications that can be directly coupled to fiber optic networks. Free-space optical communication involves the use of optical links across the space between two points, either within the Earth's atmosphere or in outer space, for data or voice communication.

"The company got its start 10 years ago by supplying specialized optics primarily for space applications like hyperstation telescopes," says Tim Welch, CFO of Media Lario. "Last December, the company made a transition where we raised some venture capital and we're now trying to take our optics technology and move it into chip making. We'll maintain the space business and, in addition, we will be a component and subsystem supplier into what's called the lithography portion of semiconductor capital equipment. For example, we'll be selling to people like Nikon and Canon who perform the lithography step of chip making."

Lithography is a step in chip making where a light is shined through the equivalent of a film negative that contains a map of the circuits needed on the chip to create an image on the silicon wafers of which chips are comprised. To make the feature sizes on chips smaller and smaller, chip makers are now using wavelengths of light so small that they are having difficulty passing the light through a lens through the negative to create the image on the silicon. So, they have to move from what's called refractive optics using a lens to reflective optics using mirrors to create the image. Reflective optics are one of Media Lario's specialties. "The company has created specialized optics technology that we've successfully used in telescopes in the past and we plan to use to them move just as successfully into the semiconductor industry," Welch says.

Media Lario, based in Italy, is privately owned by its management as well as a group of international venture capital organizations including Draper Fisher Jurvetson ePlanet Ventures, Intel Capital, TLcom Capital Partners, Vision Capital, and PolyTechnos. Media Lario has currently operations in Luxembourg, Italy, and the United States.