Dave Garb Works Hard to Put People First, Whether They're His Guests or Employees 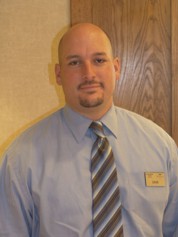 Some careers are chosen only after prolonged study of projected salaries, labor market trends, and the growth prospects for particular industries. For the lucky ones, though, the decision is much simpler. Dave Garb, manager of both the Summerfield Suites by Wyndham and Sierra Suites hotels in Hacienda, remembers the feeling the first time he set foot in the just-constructed Summerfield Suites in Belmont, near where he grew up in Redwood City.

"As soon as I walked in the door of the hotel, it just felt like somewhere I wanted to be," he says. "Nine years later, I'm still with the company, so it's a great feeling."

What attracted Garb to the hotel business was the energy and focus required. "It was a relaxed atmosphere but really customer-focused. That's something I'm really passionate about - people and providing a service that just wows them.

"I use that expression all the time with our staff. I don't want to just meet people's expectations; it's really about exceeding their expectations and when they walk out the door, they go 'Wow! What an experience!' We do everything possible to do that and I think that's what separates our hotels. Our company is really focused on that and, being responsible for these hotels, I make sure that's our number one focus."

Garb was born in New Jersey but moved to California with his family in 1977 at the age of two-and-a-half. "I've got a lot of family there so I go back to New Jersey about once a year, but California is definitely home."

His hotel career started after he dropped out of college, something that he says is unusual in his family. "My family is really involved in education: my mom's director of a preschool and my sister is a schoolteacher, my dad has been on the school board and I always felt a bit like the black sheep, just having no desire to be in school. I just enjoyed being active, being around people, but the actual studying part I could just never grasp."

As it turned out, however, Garb sees a lot of advantages to the way he has approached his career: starting at the bottom and working his way up.

"I had to start at a lower point than someone with a degree, but I think it's a huge advantage to me as a manager because I know what my employees are going through," he says. "Not only is it something I did but it's something I did not that long ago - it was only eight years ago that I was a guest services representative, so I feel like I can relate to them."

In fact, Garb holds great fondness for the first job he held at the hotel, as a van driver and guest services rep. "When I was at the desk, and I preach it to my people now, my attitude was 'anything the customer asks for, let's figure out how to do it without saying no.' I used to love that - if I could go back to any time in my life, I would go back to being a guest rep. It's the best job in the world - taking care of people, just wowing them. It's a great feeling to have a guest be blown away by the service that we provide."

He illustrates his point with a story he tells often, about how a simple act of hospitality can win a guest over.

"If a customer comes down and tells us, 'You have Snickers, you have M&Ms, you have Skittles, you have everything but Gummi Bears. I really wanted a Gummi Bear,' what I did as a guest rep was to go down to the store and buy him some Gummi Bears.

"If I knock on your door ten minutes later and say, 'Here are your Gummi Bears,' that guest will come back and they'll look for a Summerfield wherever they go. That would be something unforgettable to them. I use that a lot as an example because it's something so simple but unforgettable."

Many of Garb's management techniques center around that same concept: winning over customers with superior service.

"The level of service that I'm talking about you can't necessarily even fake. Every employee has to love working here because of the team that we have and the things that we do together and also the job that we're doing, which is providing that service. I focus all my energy on our team, that we've got the right people in place and that the people in place enjoy what they do and everyone's working towards the same goal. And that's what I enjoy.

It's a philosophy that's ideally suited to both Summerfield and Sierra Suites. Hotel guests spend weeks or months living at the extended-stay hotels and the employees, whom Garb works to empower as individuals, pass that individual treatment on to their guests.

"Right now, we have 60 people between the two hotels who are here for probably at least two months. We're their home away from home. These people don't get to go home, they don't see their families, their dogs, so we become their family, and the relationships you get with that are great things. Here we have an opportunity to build relationships with people and we have a ton of repeat guests that stay with us both because of our product and our rates and because of specific individuals that work in our hotel. That's a great thing and I take pride in that because that's somebody who believes in the same philosophy that I do, that people are important."

The way Garb approaches the task of managing the hotels is a unique fit to his skills as he balances the serious work of meeting his guest needs with his enthusiasm for playing the host at the two facilities.

"Our first goal is to take care of our customer and then after that everything has to be fun. I'm a big believer that if we're having a good time at work, our guests can feel that and see that and it makes it a better place to stay. I walk into plenty of restaurants and stores and see people who look like they don't want to be there and frankly, I don't want to be there then either. I want everybody to feel the same thing that I did when I first walked in the door."

With his attention to detail and emphasis on superlative service, chances are good that they will.