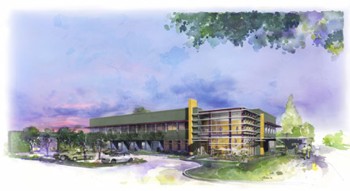 The Dahlin Group's ambitious remodel of the former State Farm building will be an attractive addition to the park.

"We are currently in the process of remodeling the building and we hope to move into it in January 2005," says Karl Danielson, a partner at Dahlin. "We're converting some of the lower floors that were used for parking into office space as well as significantly changing the street profile of the property." The firm plans to have in the area of 85 people working at the new facility when it moves in.

"One of the reasons for the move is that we wanted to find a building large enough that we could get everyone into a single building," Danielson says. "Another primary requirement for us was that we wanted a building that was within walking distance from a BART station. We have employees who live all over the Bay Area, including Fremont, Tracy, Concord, and the East Bay. We also have an office in San Francisco that's off one of the public transit lines that connects directly to BART, so this move will tie those locations together as well."

Dahlin Group was founded by Doug Dahlin, AIA, nearly 30 years ago. As president of the firm, he has been the driving force behind the multi-disciplined approach the firm takes toward architecture, designing residences, museums, university facilities, land planning, and urban design. Dahlin Group is one of the largest residential architectural firms in northern California.

"We have a fairly broad practice," Danielson says. "We do a lot of residential master plan community work as well as overall land planning and commercial work with an emphasis on recreation projects like athletic clubs and community centers. We're currently working on the Dublin Senior Center that's under construction." The company also designs custom homes and can create "design visualizations" such as computer renderings, animations, photo composites where new building designs can be in the context of existing buildings, and even broadcast-quality digital video services including scriptwriting, art direction, on-site videotaping, titling, sound design, and DVD authoring.

In the future, Dahlin plans to expand its practice even further. "We're looking to design more high-density, mixed use projects." Danielson says. "I think that with the growth we're seeing there's going to be more and more demand for those types of buildings in the Bay Area."