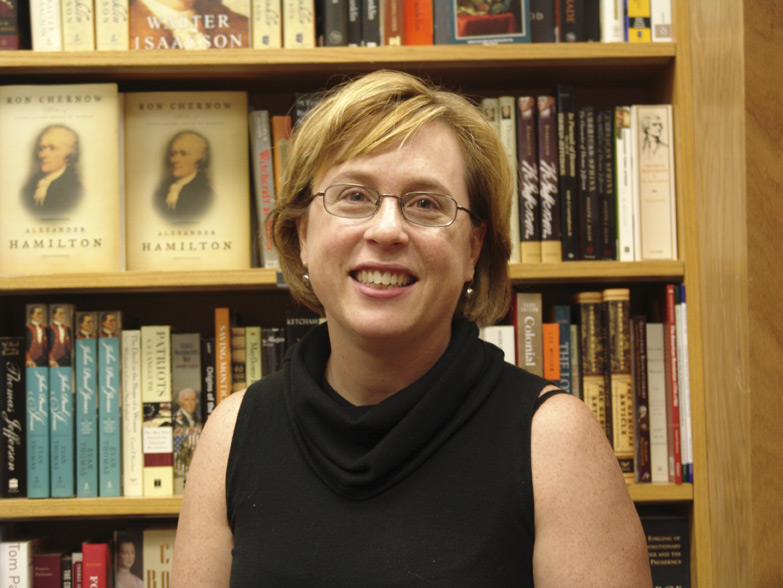 To a great number of people, there's nothing so fun and relaxing as time spent browsing in a bookstore. Few places offer a potential adventure in information and entertainment simply by stepping through a door. Choices abound: Fiction or non-fiction? History or travel? Magazines or calendars? And now, music or movies?

The constantly changing menu of knowledge is one of the things that has kept Kim Hunt, general manager of Borders, involved in the book business since she started her working career.

Hunt grew up in a small town in Maine and, after spending a year in France after high school, returned to a college in her home state to major in French. It was in Maine in 1993 that her book career began as she started working for Waldenbooks, which was acquired soon after by Borders. She transferred to the parent company in 1995.

After college, she and her fiance moved to eastern Washington, near the Idaho border. Two years later, her husband landed a job with PeopleSoft in Los Angeles so they set out for the big city.

The move allowed Hunt to return to Borders and she worked as a manager at the store on Santa Monica's popular retail area, The Promenade. It provided a number of interesting experiences that hadn't been available to her in Maine or rural Washington.

"The Promenade is essentially an open-air mall two or three blocks from the beach. The street is closed to traffic and it's a very touristy destination but you get celebrities there, too. It's a really interesting mix of people - very L.A."

Encounters with celebrities provided an entertaining sideline to the real work at the store.

"We used to keep a list in the break room and every time an employee saw a celebrity, they would add it to the list. It was about 500 names long - Tom Hanks and Rita Wilson, Dana Delaney, James Cameron, Alanis Morissette, Gwen Stefani, Christian Slater. It was a lot of fun because you never knew when they'd appear - you'd turn the corner and there was a star."

Thanks to its prominent location, the Santa Monica store also sponsored signings and performances by authors and celebrities.

"We had Cher at the store signing copies of her book and that was complete pandemonium," she recalls. "People were in line for hours and at one point she left the signing area and went outside and walked the line of people to reassure them that she would stay and sign for them. People were just overwhelmed - crying, getting their Cher dolls signed. Just huge, huge fans."

After almost two years there, she was promoted to general manager and opened a Borders in Valencia, where she remained for four years. When her husband, Michael Bisson, was transferred to PeopleSoft's headquarters, she took over as general manager here. Fortunately, there's plenty of activity in the Pleasanton store even without having movie stars stopping by all the time.

"I think one thing about the book business, and of course this is true of music and movies as well, is that it's always changing and it's always new," she says. "There are always challenges in terms of that aspect of the business. It's not stagnant, it's never boring. There's always something happening."

She also enjoys working with the great variety of people that the Bay Area offers.

"I think that interacting with people is part of what keeps the job interesting, both in terms of the people that you work with and your customers. You never know what customers are going to ask for in terms of their requests and sometimes you learn something through that interaction. Sometimes it's about a specific field or subject that they're looking for and you have no idea what that is, so you learn that little bit. And people in general can be eclectic and fascinating, so I think there's that element of it too - that constant stream of people. And of course we have a lot of regular, loyal customers as well as people who maybe have come into the store for the first time."

Watching the constant stream of changes also provides Hunt with an interesting perspective on American culture.

"Whatever is happening out there shows up in some way in here. Anything that's going on in the media always comes into play. The Lord of the Rings is a really good example. All kinds of different editions of the books are being published, there's lots of interest in Tolkien as an author, and of course all the merchandising that goes along with the movies: calendars, toys, all of that stuff. Somehow it all finds its way here."

Her management position also provides her with an opportunity to observe the trends in the publishing industry first hand, simply by observing what sells best at her store.

"Certainly in the publishing world, one trend that leaps to mind is the growth of the female fiction genre, which probably started with Bridget Jones's Diary, a book that really appealed to women and specifically younger women. In the last year-and-a-half, that genre of fiction has exploded. (There are) all kinds of authors, all kinds of books, all kinds of things hitting the bestsellers' list like Bridget Jones."

She notes that, ironically enough, one of the biggest trends in books over the past few years originated with what is usually considered a leisure-time competitor of reading: television.

"Oprah's Book Club was a publishing phenomenon. People who didn't normally read came into bookstores and started reading. That in itself is a great thing but of course it was great for the book business. Her first book club focused on fiction and a lot of contemporary authors. She discontinued that book club and then restarted it with classic authors. She started with Steinbeck and then Tolstoy was the next one, and generally speaking I think a lot of her fans wouldn't have picked up Steinbeck or Tolstoy on their own, so again it was a really good thing.

"Then from Oprah's Book Club, of course, there are a number of other book clubs that have started. All of the television talk shows have book clubs - the Today Show has a book club, Good Morning America has a book club, Kelly Ripa of Regis & Kelly has a book club. Oprah really started a trend that had a domino effect and again that was only great for us."

Above all, though, it's clear that Hunt simply enjoys books, whether it's reading them, recommending them, or just being around them.

"A couple years ago when the Internet really became popular and online ordering really started to become a standard, there was a lot of speculation about what was going to happen to bookstores," she explains. "Is the industry going to become an online business and nobody's going to want to come into bookstores anymore? That isn't what happened and I don't think it will happen because I think there's something very gratifying about coming into a bookstore, browsing, and finding something that you didn't expect to find, or finding something that you really wanted and being able to hold that book and browse that book. It's a very satisfying experience for a lot of people and a very different experience than just ordering it online. I don't think the bookstore experience is going to go away."