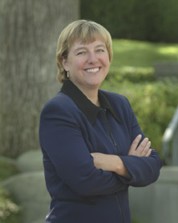 Erin Kincheloe's father was not very happy with her choice to pursue a degree in psychology. "He was so mortified that I was going to go into psychology," she says. "'You're going to starve to death! Can't you be a business major?'" As it turned out, he was mistaken, but his daughter's career path has taken her in a direction that neither one of them would have anticipated.

A Ventura native and one of four daughters, Kincheloe attended Westmont College in Santa Barbara where she received a B.A. in psychology. "I grew up in kind of a Pollyanna lifestyle and I really didn't have a lot of rough spots in my life, so I didn't think I'd have much to offer in counseling. I thought I'd go into training instead."

She briefly worked as a trainer in a retail setting and decided that wasn't the direction she wanted to take, preferring instead to go to graduate school. Training people didn't allow her the time she needed for school, however, so she sought a new job.

"This was my great career decision to go into financial planning," she laughs, emphasizing how lightly she treated a choice that made a profound difference in her life. "My roommate worked as a secretary at Merrill Lynch and she said, 'My job pays better than your job and the hours are better. You could go to school with those hours, so why don't you apply for my job?' I don't know who was less prepared for that, me or Merrill Lynch. I walked in and said, 'Hi, I've got a psychology degree and I know nothing about financial services,' and they said, 'You're hired.'"

The Wall Street firm may not have been so eager if they had known about one of Kincheloe's other traits. "Not only did I not know anything about (financial services) - I took no business classes in college - but I had a huge math phobia. When I first went in to work , one of my jobs was to answer clients' questions about their accounts. If someone called in and asked about the balance on their account - let's say they had $10,452 in their account - I would say 'one zero comma four five two point zero zero.' And they would say, 'OK, you're a lunatic.'" She laughs about it now - she got over her math phobia and also completed a Masters degree in counseling psychology from the University of San Francisco - but she notes that her unique way of reading numbers was "a standing joke" in the office for a time.

Her big surprise, though, was that she really enjoyed her job with the brokerage.

"As I spent more time in that industry, I really realized that I liked the fact that for most people, there's an awful lot of psychology wrapped around their ideas about money," she says. "I started to see all the tie-ins with my training and I realized that this could actually be a really great business for me to do because I had some understanding of the underlying psychology of what was going on with money. I ended up staying with Merrill Lynch for quite a while - I got my broker's license, started dealing with clients, and really kind of found that that was a great mix for me."

Part of her insight into the intersection of psychology and money has to do with the different attitudes that men and women have about investing. That knowledge has played a key role in the development of Cents & Sensibility, the financial services firm she founded with Sharon Almeida, the company's CEO.

"We're not an exclusive female firm but we're what we call a female friendly firm, where we really have tried to present financial services and financial planning in a way that it is a very comfortable, understandable, embraceable thing for women, which I do think is different than it is for men.

"If you look at it from a psychology perspective - take the Myers-Briggs psychology test, for example, the personality profile. Most women come out very relational as opposed to very analytical and yet the Wall Street approach is very analytical. It pulls up all the images that really have to do with that method of looking at what you're doing with your money. I'll give you an example. Let's say that somebody comes in and they want to talk about retirement planning. I find that our male clients are like, 'OK, what kind of return am I going to get with that kind of plan?,' and the women are saying, 'Am I really going to be able to retire?' The number is not less important - it's the security and the overall comfort that they can get in knowing that 'If I do these things, then this is what it's going to allow me to do.'

"It's a very different take on it. I find that if a woman comes in here and sits down and I say, 'We can get you this rate of return compounded over time...,' their eyes glaze over. Instead, I say, 'Tell me what's important to you.' 'You know, I really want to retire and I don't want to be a burden to my kids, I want to be independent, I want to stay in my house,' and I reply, 'Let's talk about some of the things that you can do to do that, and we can set you up with those goals and get you moving in that direction so that you'd know that after X period of time, you'd have that security.' Now they're calm, they've taken a deep breath, they're relaxed, and they're engaged in the process.

"This is a generalization, because there are definitely women who are more analytical and men who are more relational, but... you have to work together to mesh those two approaches because you can't say that one is right or wrong. One is just the numbers and one is an emotional or relational type of thing. It's a funny thing, though, because it's almost always that the guys want to know the monetary thing and the women want to know what will make them feel secure."

Kincheloe shares another observation about the difference between male and female investors. "I find that women, and again this is a generalization, tend to be more conservative than the men are and they tend to be a little better investors because of it, because they're pretty consistent with what they do. They tend to be a lot more holistic about how they make their decisions, so if someone comes in here it's not just about the investments, it's about 'What is your life looking like?' They make their decisions in the sphere of that whole, and then they just march along and continue doing that."

The firm has also had great success in working with teachers, which may not be surprising for a company that takes its name from a Jane Austen novel.

"It all kind of works together" is also a fitting summary for Kincheloe's career marrying psychology and investment strategy. Though Kincheloe's father passed away before he could see her career unfold, she is certain about what his reaction would be. "He'd be so proud. Now I think he's up there, smiling down. 'Look! It worked! She's a business owner and she has a psychology degree!'"