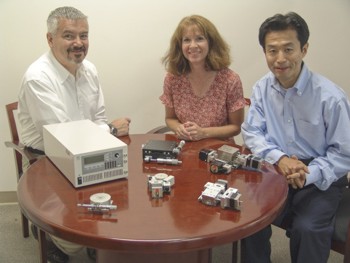 Andy Ligeti, Suzanne Bitz, and Shoji Uehara of Kohzu America show off some of their company's sub-micron motion instruments.

The precision of modern devices represents an achievement that simply could not have been reached even 20 years ago. Whether the device is a computer hard drive that requires the exact placement of a laser head to read data from a disc, or a custom instrument for scientific research, the challenges are similar. If the device or the machinery that is assembling it needs to move in a precise manner, some means of effectively controlling that movement is a necessity. For both manufacturing and scientific applications, many turn to the precision positioning equipment produced by Kohzu America Inc., a company in Hacienda at 5674 Stoneridge Drive.

"Our company produces equipment for any application that requires precise motion," says Andy Ligeti, general manager of Kohzu America. "Our devices, which can control linear, rotary, and other types of motion, offer extremely high precision. We're a relatively small group, but we serve a very specific niche that has very demanding requirements."

Kohzu's evolution from its beginning more than half a century ago to its current status as a leader in high-tech positioning equipment has a lot to do with learning from experience, as Ligeti explains. "A lot of our products have been developed through projects with customers," he says. "They'll have a particular type of motion requirement and, in developing the device they need, we'll come up with a new standard product that we offer to all of our customers."

Kohzu's primary customers in the U.S. include prestigious scientific research centers like Lawrence Berkeley National Laboratory and Argonne National Laboratory in Chicago. These two facilities perform synchrotron radiation research, which uses high energy X-rays or ultraviolet light rays to perform experiments in areas such as materials science. For example, to determine the properties of a material sample (perhaps cells or minerals), electrons are accelerated to nearly the speed of light to produce X-rays. The X-rays are then aimed at a very small sample that is sometimes microscopic in size. That material sample is mounted on one of Kohzu's sample positioning devices (called a "stage"). It can then be moved in space with sub-micron accuracy to allow the X-rays to scan its surface, producing an image from which the scientists can gather information. Other types of experiments that require equally high precision are also done by these laboratories.

NASA is also among Kohzu's customers. The company recently delivered a stage to the organization to be used in a research tool that Ligeti expects will help perform zero gravity experiments related to growing crystal materials. The crystal growth experiment will be performed on Earth and on the International Space Station. The research device will then use X-rays to create images of both crystal structures for comparison. Other applications for Kohzu's stages include manufacturing devices that position the sensors in digital cameras and measuring devices used in semiconductor testing.

Kohzu America is a subsidiary of Kohzu Precision of Japan. Kohzu Precision was founded in 1945 as a repair shop for surveying equipment. Since that time, the company has continued to develop and deliver increasingly precise and specific devices for scientific research, manufacturing, and testing. Kohzu America was opened in 2000 and the company will be celebrating its first anniversary in Hacienda in December of this year. Three people work out of the Pleasanton sales and distribution office and 120 work at the company overall.