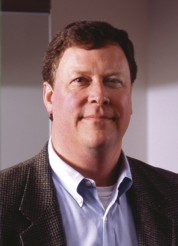 Technology is known as one of the most demanding fields of business because of the speed at which it operates. The time between the origination of an idea and its implementation in a product is short, especially when compared to other industries. One consequence of this environment is that you are continually facing new challenges so that your business is not overtaken by the speed of change.

Operating a business at high speed requires unique talents. If you were to look for a prototypical high tech CEO, Jim Vogt of Trapeze Networks would be a good choice as he has experienced and managed rapid change throughout his career. After earning his B.S. in electrical engineering from the University of Nevada, he began his career at Bell Northern Research (which became Nortel). He worked there as a hardware engineer while attending Santa Clara University, from which he received his MBA. It was his father who inspired him to pursue both a technical degree and a general business degree.

"My dad was a very good general manager and he ended up in the telecom industry, but he was a mechanical engineer by trade," says Vogt. "And part of his guidance to me was, 'You need to be technical. The market is getting to be very technical, the products are technical, so get a technical degree. It's great if you get a business degree later on or you get into general management through some other means but get the technical basis.' I think it's good advice because understanding the technical basis - even at a CEO level - helps you build a better company. You can understand all the issues and not just trust those issues to other people. Also, when you get in front of a customer, being able to convey some of the technical aspects of your solution at this level, especially in this industry, is key."

After receiving his MBA, he moved to a neighboring business, Synoptics, who were pioneers in 10Base-T Ethernet networking at a time when companies were just beginning to build their networks using the technology. "It was about a $175 million company when I joined and over the span of about six years we built it into a $2.5 billion company, so that was a very large growth curve. Within that growth period I had several product lines that I managed."

Synoptics merged with Wellfleet and the combined businesses were acquired by Nortel, bringing Vogt full circle in the course of a few years. He soon found himself running a combined product line as president of the Nortel Networks small business solutions group. "That was essentially about a $1.5 billion business, a big business. So from the little walk down the block to Synoptics, in about 10 years' time I got to see some pretty good growth."

After leaving Nortel for the second time, Vogt took his first job as a CEO with a startup company, Ingrian, a data security company which worked on encryption solutions related to credit cards. He led the company through two rounds of funding, building up the company's internal infrastructure and establishing a solid customer base, before coming to Trapeze.

"My career has mainly been in the data and voice communications sector, specifically targeted at the enterprise," he says. "That's exactly the type of customer that we're targeting with Trapeze, so that's background fits very well."

At Trapeze, Vogt feels he has positioned the company to take advantage of what he sees as "the next big infrastructure play within networking," the integration of wireless technology into a secure enterprise network which delivers data, voice, and other types of information.

He addresses that evolutionary step in terms of both a threat to companies and an opportunity for them. The threat is that employees, wanting the freedom that wireless data connectivity brings, will take matters into their own hands and install their own WiFi access points without IT department oversight, creating an unlocked door into the company network. "Now you have an intrusion in the network where there's no security, there's no (data management) policy, and there's no control over that access," he explains. "There's a need that's already evolving in the enterprise and it has to be met.

"The opportunity is mobility of the technology - to be able to have everything you have at your desktop but now you can walk around the building with a laptop. People want to be mobile within the workplace and they want to be able to use (their computers) from home."

While it sounds like a simple concept, Vogt believes the integration of this technology into a business can create significant advantages.

"Logitech is a great customer of ours and worldwide, they want to instill a culture where decisions can be made instantly. It's not like you leave a meeting and have action items when you get back to your desk, 'I'll send that to you' or 'I'll get that for you.' People are sitting in the room with their laptops saying, 'Oh you want that? I just got that e-mail' and boom, it's across the table to the guy who wants it.

"They also want to have that mobility in their remote sites where, if I'm traveling and I've left the corporate headquarters in Fremont and I end up in an office in China, it's as if I'm sitting in Fremont because the network is all tied in. The Network Operating Center or NOC, as we call it, is in Fremont. It's all globally deployed, managed, and secured but you have all that mobility within the workforce now where you can enter any location. It's the same with retail, where you can be out at any store location and essentially have access back to corporate. Our product spans the large campuses where you can install this infrastructure all the way to distributed remote sites that can be either (defined and managed as) disparate remote sites or can be unified through a NOC."

Vogt is also enthusiastic about the use of multi-mode handsets with Trapeze networks, which would provide a similar mobility to company telephones. "You can take your cell phone and when you walk in the building, it becomes a (WiFi) phone that uses the network and gives users access to all the services of the PBX like their company voice mail and conference calling. That's kind of the whole world that we're headed into."

Vogt sees a number of challenges before we get to that world, though. Much of 2005 was spent focusing on creating strong partnerships with companies like 3Com, Enterasys, Nortel, and Motorola, the latter two having invested in Trapeze as well.

"My challenge next year is continuing to double the business. We basically built six times growth this year and we're going to do 200 percent growth next year. We have a licensing business that we charge for our software which we do both direct and through our partners. We sell to Original Equipment Manufacturers who sell our products under their own brand, and we have our own private branded business. We've been strong in Europe, we've been strong in the U.S., we're just now starting to build into Asia. So those are the growth aspects we're building into 2006-2007 and 2007, so the biggest challenge is handling all these relationships and still maintaining the growth of our brand and of the company. So it's a different challenge from last year."

It's a different challenge but one that Vogt is happy to face. After all, if you're facing the same set of challenges year after year, you're probably not making much progress.

"Most people would say that you get a better set of problems. They're problems but they're better than the last set. That's kind of the progression if you're getting things done."