Joe Callahan: Visionary with a Penchant for New Projects 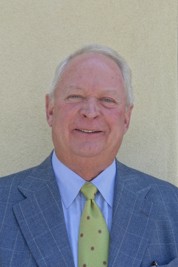 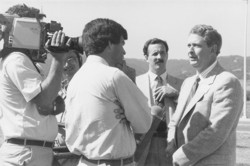 "My father was the son of an Irish immigrant who arrived in the US in 1882. He was born in Basin, Montana in 1904. He was an energetic, up-and-ready person who was interested in everything and was always doing something," Joe Callahan remembers. "He retired from the Navy as a decorated rear admiral and, during his Navy years and after, he and his brother operated my grandfather's gold mine back in Montana. He was also a commodities speculator who bought and sold wheat and soy beans, the crops his family members raised in Montana, and did very well at it.

Callahan followed in his father's footsteps and graduated from the U.S. Naval Academy in 1964, spending most of his career in and around Viet Nam. His final duty, in 1968, was spent at the Bureau of Naval Personnel in Washington, D.C. helping set up the Navy's transition program for enlisted men separating from the service.

"I traveled around the country, working at getting corporations to set up programs for the separating veterans," Callahan says. "That experience convinced me I did not want my future to include a career working 9 to 5 for one of them. Instead, I joined a small-but-growing company, Xerox Corporation, following separation from the Navy in June 1969."

During Callahan's time at Xerox, the company was moving from resistor tube to solid state semiconductor-based technology. The Navy had been making that same transition and Callahan had read a great deal about the technology, which generally originated in Santa Clara County. He was convinced it was the wave of the future.

"I knew I wanted to stay in sales and wanted to combine that with the love of property that was in my Montana blood. Those factors and my belief about the future growth of the semiconductor industry prompted me to move to San Jose in 1973 and go to work for Coldwell Banker Commercial. It happened to be a time when a commercial property meltdown was happening all over the U.S. as REITs (real estate investment trusts) went through a massive failure. A lot of the major lenders were collapsing loans on a variety of commercial and residential property."

One evening in late 1974 in a Saratoga club, Callahan met Nolan Bushnell and Joe Keenan, the founders and heads of Atari and Key Games, respectively. With Keenan, Bushnell and a few others, he established a series of development partnerships that acquired properties in Mountain View and Sunnyvale during the down market. The properties were generally not subdivided and in some cases unzoned. By 1976, while the market was still soft, he had mapped and subdivided some of the parcels and started construction on several speculative buildings.

"In 1974, Callahan also had become a listing agent for a large Prudential project called Moffett Park and had began working with Prudential Realty Group (Prudential). Early in 1977, he left Coldwell Banker and , with George Pentz, formed CPS, a Commercial Real Estate Company. They hired two brokers and staff to market both Prudential and their development properties. When the market turned around in 1977, Santa Clara County boomed. Prudential and CPS enjoyed tremendous success selling and leasing property in Moffett and then began looking around for a new area for a major development.

"Late in 1977 George and I optioned a 300 acre parcel at the northwest corner of the I-880 and Montague Expressway in the City of Milpitas. We were successful in obtaining Business Park entitlements for it quickly and entered into a co-development agreement with Prudential for what became the Oak Grove Business Park. We recorded the tract map for it early in 1978 and commenced a land sale and speculative building program while the subdivision improvements were being constructed. By late 1978, more than 50% of the projects' 220 net acres were either sold or had a leased building under construction on them.

"Based on this, coupled with our ongoing Moffett Park activities, Prudential, George, and I concluded that another major project was needed. We looked all around the greater Bay Area, working with a consultant whose specialty was analyzing job and residential growth and commute patterns. Prudential and I determined that the area around the 580/680 interchange could be the next major growth area for employment in the Bay Area. We acquired contracts to purchase the first portions of what is now Hacienda Business Park in 1978, 1979, and 1980, assembling six properties in total for the project. In 1980, with Moffett and Oak Creek booming, George and I admitted four new partners to CPS to expand our business capacity."

In 1982, the subdivision of the first 600 acres of Hacienda was begun. "In order to make improvements to the surrounding I-680 and I-580 interchanges and provide a long term financing source for infrastructure to support the park, the City and major property owners established the North Pleasanton Improvement District. "This public finance district provided some of the funding that allowed us to create the illusion, and reality, of a major location," Callahan says.

"Shortly after our commencement of Phase I subdivision improvements for Hacienda, a local group, Citizens for Balanced Growth (CBG), sued the City of Pleasanton, Prudential and CPS, challenging the project's Environmental Impact Report (EIR), the city's General Plan, and Hacienda's zoning ordinances. The judge acknowledged the city's certification of the projects EIR, but set aside its project related general plan amendments and zoning ordinances. This meant the city had to rewrite its General Plan entirely, complete and certify a related EIR, and readopt the Hacienda entitlements. This process took two years to complete. Once complete, CBG referended the project and in April 1985 the referendum was defeated by a 65% to 35% vote with over 60% of Pleasanton voters turning out for a special election.

"CBG had failed to challenge the Hacienda subdivision map and the underlying city General Plan and zoning supported most anticipated project uses. Prudential and CPS elected to go forward with Phase I of the project despite the legal action. The Phase I intract improvements were completed and over one million square feet of speculative buildings constructed in 1982 and 1983, with first occupancies occurring in August 1983.

"The public improvements included massive flood control upgrades that removed both Hacienda and several existing residential neighborhoods from the 100 year flood plain (Val Vista and Valley Trails, in particular), upgraded Hopyard Road from Owens to Valley Avenue, Santa Rita Road from I-580 to Valley Avenue, Stoneridge Drive from I-680 to the West Las Positas extension, and West Las Positas from Hopyard to Santa Rita. In 1985 the upgrading of the I-580/Hopyard Road interchange commenced. By the time of the referendum, Hacienda was a physical reality and the community benefits obvious to all concerned.

In 1983, in the midst of the lawsuit and prospective referendum exercise, Mark Sweeney and Pat O'Brien joined the CPS Pleasanton operation and provided a big boost in moving the project forward. Despite all the distractions, 1983, 1984, 1985, and part of 1986 were good years for Hacienda."

In 1986, foreign electronic companies briefly impacted the US semiconductor industry's world wide market share and Santa Clara County experienced another recession. Though Callahan, Prudential and others had constructed over 4.5 million square feet and leased roughly 4.0 million square feet and thousands of workers were employed in Hacienda, they had not been entirely successful in the land sale program that was crucial to their financial success.

To add to the market pressures affecting commercial real estate in 1986, President Reagan, Representative Rostenkowski, Chairman of the House Ways and Means Committee, and Regan's Treasury Secretary collaborated on the 1986 Tax Reform Act. This action radically affected and increased the cost of risk capital typically invested in all types of rental property by removing favorable tax treatment of predevelopment and in process risk capital contributed to real estate development projects. The effect of this was to cause high risk capital investments to be made with after tax rather then pretax dollars. Overnight there was a major flight of risk capital out of the business.

Additionally, there was a commercial/industrial/office speculative building boom underway that commenced in 1980 driven by US federal government regulatory changes allowing Banks and Savings and Loans to lend insured savings to developers. This 1980 federal legislative act effectively had eliminated barriers to entry into the development business. "As a result of the deregulation of Banks and Savings and Loans in 1980, money was being loaned to anybody and everybody for development and a massive amount of speculative building was taking place," Callahan remembers. "The substantial downturn in Santa Clara industries, coupled with the 1986 tax act and excessive speculative building prompted me, in 1986, to start selling property and reducing my business interests so I could buy my way out of the market mess. In 1987, the US government reregulated the lending institutions, and, in 1988, formed FIRREA and the Resolution Trust Corporation (RTC) to eliminate the overhang of excess property debt. These cumulative actions caused the biggest meltdown in commercial development in US history and substantially reduced investment in all types of residential rental housing. It took from 1986-1993 for me to restore my business equilibrium."

By 1994, Callahan was able to focus again on development activities with a small organization, concentrated on more specific types of projects that were largely residential and/or mixed use in nature. The years from 1998 to recently were spent redeveloping the Valley Memorial Hospital property in Livermore and building senior citizen housing on the opposite side of Stanley Boulevard as well as completing entitlement of several residential projects around the East Bay and in Vallejo.

"Why do all this?" Callahan poses. "I'm interested, probably excessively, in seeing if my ideas are viable. I'm a gambler in business, like to take chances, and take perhaps too long a view of things.

"My engineering education at the Naval Academy has enabled me to collect, assimilate and apply huge amounts of data, which has helped me greatly in the land business. I understand what the land and structural engineers are talking about and it has given me insight that a lot of my peers never grasped.

"Conversely, I've never been very interested in finance, which has been my weakness. Many developers have been immensely successful, not necessarily because they understood the market or what they were building, but because they were extremely good at finance. I understand it, but it's never been my principal interest or focus. I like to build projects. I regret that because being good at finance is what allows developers to control their environment in this business."

Callahan also acknowledges the spectrum of people and events that have had a lasting influence on him through the years. According to Callahan, his time in Viet Nam gave him confidence and taught him perseverance. Nolan Bushnell and Joe Keenan influenced him with their creative drive and curiosity. Art Jacobson of Prudential shared his exceptional grasp of property and markets. His wife's even, relaxed personality has helped "moderate some of my extremes."

"I've been asked where the name Hacienda came from and why the arches, Callahan adds. "During our pre-acquisition due diligence, we noticed that much of the land in the Tri-Valley had originally been acquired by individuals in the early 19th century via Spanish land grants. Underlying title maps still reflected some of these grants and the haciendas related to them, thus the name. While it's hard to imagine today, you have to recognize that in 1982 the park it was a vast open area; there were no interchanges except for a modest one at Hopyard and I-580, and it was difficult for interested parties to find the property. The arches helped to solve that condition by letting people know they were in Hacienda.

"I was lucky to stumble into a business that I love and enjoy even though it is extremely diverse and unpredictable," Callahan concludes. "You have to stay light on your feet, be patient and persistent, keep a close eye on government process, and keep looking forward."