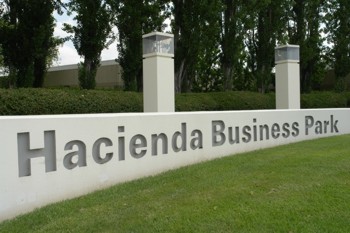 Twenty-five years ago this month, the Hacienda dream became a reality as the architects of the dream, Joe Callahan and, later, his partners, Patrick O'Brien and Mark Sweeney, opened the park for business. The realization of Callahan's vision would forever change the landscape of the Tri-Valley and would create a host of improvements that continue to benefit the entire region.

As co-developer in the dream project, the Prudential Realty Group, part of the Prudential Insurance Company of America, brought the power and expertise of the number one owner/developer of commercial real estate in the nation at that time. Hacienda, Northern California's largest development at 876 acres, was an ideal project for the company that also owned other high-profile projects in the Bay Area, such as Embarcadero Center, San Francisco Hilton and Towers, Park Hyatt, and Pacific Telesis Center that included Crocker Galleria and Telesis Tower.

Joe Callahan had been a client of Pat O'Brien, a CPA in San Jose in the early 1970s when Callahan was with Coldwell Banker. In 1983, O'Brien became a partner in the project. The next year, Mark Sweeney, who also had been with Coldwell Banker, joined the two in their effort to create a major business center in the Tri-Valley region. Originally, the property had been zoned for heavy industry, but Joe Callahan had another idea, a mixed-use office development that would house high-technology companies and support businesses. (See, also, story on page 2.)

Though development of the I-580/I-680 region was inevitable, not all Pleasanton residents saw it that way. On April 10, 1985, the Hacienda project went to a vote by the citizens. "The night before the referendum election, the project hung in the balance," Mark Sweeney say. "A severe rainstorm threatened to keep voters away. We thought that the older residents of Pleasanton, if they came out, would vote in favor of the project because they would understand what benefits Hacienda would provide to the community with the tax base it would bring." That, the myriad public improvements made by the project and the commitment that Hacienda would maintain its own infrastructure (a commitment valued today at more than $1 million annually) in perpetuity made the project palatable to budget-conscious citizens. The rain stopped. Voters came out in record numbers and the partners were proven correct. The project passed by just less than a two-thirds majority.

"There were fun and exciting times mixed with the very difficult issues," recalls O'Brien. "I have fond memories of the community parties and fundraisers we hosted in some of the buildings like the Saratoga Center and the Willow Center that were just shells at the time. They were grand affairs with guests in their finest attire arriving at unlandscaped, vacant buildings. It was the beginning of the spirit of cooperation between Hacienda and community groups that still exists today."

AT&T's Western Regional Headquarters moved to Hacienda in 1983 when there was strong activity in the commercial market. Hacienda's first years were marked with a surge of activity that saw the arrival of many new tenants, some who are still here today. By 1985, though, the market had begun a 10-year downturn and Prudential and the trio of Callahan, O'Brien and Sweeney went from the euphoria of completing the entitlement work to the stress of empty buildings. Fortunately, careful planning meant that the Hacienda dream was not in jeopardy long-term because all the funding mechanisms were in place for the freeway interchanges, the arroyo improvements and other key pieces of the project. Furthermore, the local community was already benefiting from the early improvements and would benefit long-term from the project's ultimate success.

During this period, Mark Sweeney emerged as the most visible of the three when he went to work with Prudential's Hacienda Marketing and Sales, a separate company that represented Prudential's interests, in 1988. Prudential and Sweeney worked hard to move Hacienda forward even in a down market and made considerable progress given the circumstances.

Out of necessity, new uses for the land emerged during that time and were incorporated into the project. Hacienda saw the construction of the Unisource facility, more residential projects, and even two public parks.

By the mid-1990s, the commercial market began turning around and Hacienda saw key new tenants arriving - PeopleSoft, Roche Molecular Systems, and Shaklee, for example. In 1999, about twenty years after Joe Callahan began contracting for property, Prudential had sold the balance of its acreage.

Even with Hacienda's original co-developers now departed from the project, the momentum of the dream continued. Recent years have witnessed the arrival of still more major new tenants like Kaiser IT, State Compensation Insurance Fund and Simpson Strong Tie. Today, Hacienda is humming with the activity of nearly 20,000 employees and 3,500 residents and, even now, new projects are being planned.

"No matter what business you invest in, you leave some kind of statement over time. In Pleasanton, I believe Hacienda is the one that will leave the greatest mark," says Sweeney. "Joe put his money where his mouth was. He set the tone for Hacienda's integration into the community because he believed that enhancing the community was part of the cost of entry. Today, we have a vital business center that provides a large tax base while maintaining and paying for itself."

Pleasanton Mayor Jennifer Hosterman agrees. "We are so proud that Hacienda Business Park is located in Pleasanton. The management and ownership of the park have been outstanding partners in making Hacienda a desirable place to live and work in this community. By staying attuned to the needs of Pleasanton and the Tri-Valley, Hacienda Business Park has been a significant contributor to the quality of life we all enjoy."