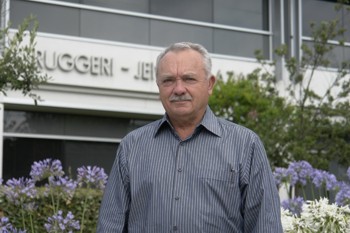 In the 1970s, Pete Ruggeri, now president of Ruggeri - Jensen - Azar & Associates (RJA), was an engineer working with Willow West Properties, owners of the land where Hacienda was to be developed. He produced a $600 photographic map of the property and presented it to a prospective buyer named Joe Callahan. That act the beginning of the realization of a dream for both men, the creation of Hacienda Park.

Over the next three decades the two would collaborate: planning, working and witnessing the evolution of what had been hop fields and pastures into the showcase mixed-use property that is Hacienda today.

Ruggeri's employer, Bissell & Karn, completed all of the engineering, planning, surveying and infrastructure design for the Hacienda project for their clients, Joe Callahan and Prudential. "They were the ideal client because they didn't put any design restrictions on us. They wanted to do things correctly and they had the means to be able to do that," Ruggeri says. "We're very proud of the fact that this project was done properly from the very beginning."

According to Ruggeri, the developers were committed to the idea that the project not be a burden to the surrounding area but provide improvements to the community as a whole. Flood control and better transportation circulation were just two examples of the improvements. The widening and signalization of Hopyard Road as well as the Hacienda Drive, Santa Rita Road and Hopyard Road improvements all demonstrate RJA's expertise.

"Our company worked on the infrastructure and commercial development with the original focus in mind, but then, as the years went by, the park changed to serve housing, too," adds Joanne Wilson, RJA's business development director. "With that change, our firm adapted and we became experts in transportation, becoming very involved in area projects like the Valley Avenue extension, the BART extension and the 580/680 interchange renovation.

Through the years, the firm had evolved in other ways as well. Originally focused on residential development projects, Bissell & Karn had become commercial development experts with Hacienda's creation. In 1990, the firm merged with Greiner, Inc., an international transportation-oriented firm.

Pete Ruggeri created Ruggeri - Jensen - Azar & Associates in 1995. Today, RJA employees 110 people, about 12 of whom were with the company when Hacienda opened for business. In 2000, the firm built and occupied its new headquarters facility at 4690 Chabot Drive.

"We've been successful because we have good employees and work for clients who have viable projects, projects that make sense," Ruggeri notes. "Today, we're the oldest engineering firm in Pleasanton and have been involved in many major projects here like Ruby Hill, Vineyard Corridor improvements and Bernal property, but it makes me especially proud to have been involved with the first development of Hacienda."