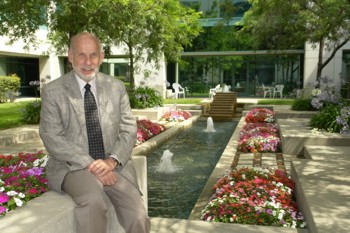 One day in 1979, Pete Ruggeri of the Bissell & Karn engineering firm suggested that Chris Kinzel speak to Joe Callahan about a proposed project called Hacienda. For Kinzel, president of TJKM Transportation Consultants, the meeting that resulted was the beginning of three decades of involvement in all aspects of Hacienda's transportation planning - from traffic studies to street circulation to signal design. Soon, TJKM's work would extend well beyond the park to all of Pleasanton's major streets and the nearby freeways.

"We had a hand in virtually every aspect of the movement of people by vehicle through and around the park," Kinzel remembers. "We determined the location of the streets and how wide they would be, the length of the left turn lanes, where the traffic signals would be placed."

Kinzel recalls the day when one of TJKM's young engineers announced "We're going to need another interchange." Joe Callahan had already anticipated that, Kinzel explains, but had waited for the results of TJKM's studies and projections to build the case for the Hacienda interchange on I-580. It was a major undertaking because both I-580 and I-680 are part of the interstate freeway system and improvements to them involve the Federal Highway Administration as well as Caltrans, local and county governments and regional bodies.

In the days before the Congestion Management Agency, TJKM became an expert in traffic forecasting, able to project traffic conditions 20-30 years into the future. What began as transportation planning for Hacienda project evolved into a transportation plan for the entire Tri-Valley area.

"Though working with a large team of experts is an everyday occurrence for TJKM now, it was a rarity in the 1980s," Kinzel says. "Looking back, our recommendations worked out quite well. Even today, the congestion that vehicles may experience in the area is rarely within Hacienda."

Reflecting on TJKM's success over the past 25 years, Kinzel says that many of his firm's strengths came out of the Hacienda project. "We became experts in computerized traffic forecasting, something that's critical to every growing community in California these days. We also became known for customized traffic signal design, like the one that is incorporated into the structure at Stoneridge and Hacienda Drives. That was a first of its kind.

"As in many industries, the most significant difference in the way we work today as opposed to the early days of Hacienda is the use of computers. We've invested in the best equipment possible and it's been a wise tactic for us."

Today, TJKM is involved in many projects from Bakersfield to Crescent City and maintains satellite offices in Fresno, Sacramento and Santa Rosa. This fall, the firm will move to new headquarters in Hacienda at 3875 Hopyard Road, Suite 200. More information about the company is available at www.tjkm.com .