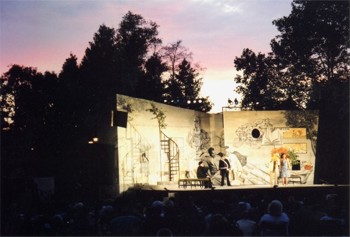 Wondering where to go to enjoy live entertainment and cultural enrichment? Look no further than the Tri-Valley, home to a variety of performing arts groups and organizations offering quality entertainment.

Civic Arts, a program of the City of Pleasanton Department of Parks and Community Services, offers everything from public art to community and school performances, and also sponsors Pleasanton's poet laureate program. All indoor shows are presented at the Amador Theater, 1155 Santa Rita Rd., in Pleasanton on the Amador Valley High School campus. Here's a sampling of the programs Civic Arts has on its schedule:

Civic Arts Stage Company , a group of actors of all ages from the community, will perform Box Car Children in spring of 2008.

Civic Arts Youth offers a wide range of classes in many forms of artistic expression for all age groups. Arts experiences for young people include youth theater, dance, poetry, the annual Halloween haunted house in October (Oct. 25 and 26 this year). In February, Civic Arts hosts the Youth Music Festival, and, in early June, the Children's Art Festival. For more information, call Pleasanton Parks and Community Services at 925-931-5340.

Civic Arts Poet Laureate program sponsors Century House Poetry Readings one Sunday afternoon during the even-numbered months as well as many other poetry-centered events for all ages. The annual Poetry, Prose and Arts Festival takes place in early April. Visit www.civicartsliterary.org for details.

Civic Arts Special Events . Pleasanton Civic Arts hosts a number of special events that include Celebrating Art Made Easy in May and San Francisco Shakespeare Festival's Free Shakespeare in the Park and Woman's Will's, all-female Shakespeare troupe, at local parks during the summer.

The Pleasanton Cultural Arts Council was incorporated in 1974 to promote appreciation of the arts, provide facilities for arts activities, and create an environment where residents can pursue and enjoy a wide range of cultural opportunities. In concert with many area funding organizations, businesses, and individuals, PCAC supports a wide variety of artistic programs in the schools and the community at large. For more information call the Council at 925-461-4864 or visit the organization's website at www.pleasantonarts.org .

In addition, the theater is expected to host visiting performance ensembles from around the Bay Area, including Pacific Chamber Symphony, Lamplighters Music Theatre, Children's Theatre Center and others. Finally, LVPAC itself will be presenting more than two-dozen performances in music, theater and dance, featuring artists and ensembles from across the United States. For more information, visit the center's website at www.livermoreperformingarts.org , or call 925-373-6100.

Local performing and fine arts groups in the Tri-Valley are abundant, and many even encourage those interested to pursue their interests and participate in their organizations.

Cantabella Children's Chorus , under the guidance of artistic director Bee Chow, is composed of young people from the 4th through 10th grade (graduates in the 11th and 12 grades may return to sing as alumni), placed in various choir levels according to age, maturity and musical ability. Cantabella Children's Chorus provides members with the opportunity to participate in choral festivals and workshops that introduce them to other choral groups and clinicians. Qualified singers are often selected to participate in operas requiring children's roles produced by the Livermore Valley Opera. Also, a select group of singers perform in collaboration with the Valley Concert Chorale for several concerts. For more information call 925-292-2663 or visit the Chorus' web site at www.cantabella.org .

Harmony Crossroads Chorus is an award-winning, Pleasanton-based chapter of Sweet Adelines International, offering a warm, supportive environment for women in the Tri-Valley area who want to develop their musical skills. Based in Pleasanton, this a cappella chorus performs in numerous local events in the valley, including Art in the Parks, First Wednesday Street Parties and the Alameda County Fair. Established in 1993, the chorus has been Regional Small Chorus Champion four times in the past eight years. Visitors and potential members are always welcome at rehearsals. Call 925-249-0856 for more information or visit their web site at www.harmonycrossroads.com .

Las Positas College Performing Arts offers a variety of presentations offered by its students in the performing arts. Upcoming events include Children's Theater Show, October 26 and 27; Cuesta Jazz Festival, November 2 and 3, Vocal Jazz Concert December 14, and Choir Concert December 15. Most performances take place in the Las Positas College Theater and are typically priced at $10 for general admission and $7 for students and seniors. For more information call the Las Positas College Performing Arts Event Line at 925-424-1100 or visit the college's Arts Calendar website at www.laspositascollege.edu/performingarts .

Livermore-Amador Symphony, now in its 44th year under the direction of Dr. Arthur Barnes, is a volunteer community orchestra. The orchestra meets September through May and plays four main programs plus a "Pops" concert. The Symphony collaborates with many musical groups in the Tri-Valley. The orchestra provides both pit players and a conductor for Valley Dance Theatre's productions of The Nutcracker each December. The Competition for Young Musicians began in the 1973-74 season giving the opportunity for the winning soloists to perform with the symphony each February. Rehearsals are Tuesday evenings at 7:15 p.m. at East Avenue Middle School in Livermore. Call 925-447-8789 for information about participating in the Symphony, 925-447-3672 for ticket information, or visit the Livermore-Amador Symphony's web site at www.livamsymph.org .

Livermore Valley Opera , founded in 1992, combines the talents and expertise of professional music, stage, and chorus directors, principal singers, musicians, and designers with the dedication and practical abilities of a volunteer board, adult chorus, stage crew, props master, stitchers, and set builders. Each fall and spring, LVO presents a locally produced, fully staged opera with an orchestra in the Bankhead Theater. In addition, LVO presents special concerts, events and fund-raisers such as its "Dinner with the Opera" series in the winter and "Opera in the Vineyard" in the summer. For more information, call 925-960-9210 or visit the Opera's web site at www.livermorevalleyopera.com .

Pacific Chamber Symphony , founded in 1989 by a group including director Lawrence Kohl, performs at the Valley Community Church in Pleasanton and other venues throughout the Bay Area. The group's season begins in November and continues through April. As the regional chamber symphony for the greater San Francisco Bay Area, members reside in the communities where their core supporters live and work. The group's performances, educational programs, and civic participation exist for the purpose of cultivating a greater sense of community. Call 925-484-9783 for tickets or information or visit the Pacific Chamber Symphony web site at www.pacificchambersymphony.org .

Pleasanton Chamber Players , founded in 2002, are a group of professional musicians who perform and teach in the San Francisco Bay Area. The group's goal is to bring classical music to the Tri-Valley on a professional level in the form of chamber music, where each member of a small group performs expressing the unique voice of his or her instrument. They currently perform two concerts a year, and are scheduled to perform for City of Pleasanton's Civic Arts Presents at the Amador Theater on February 24, 2008. For more information, contact Dominique Piana, the group's founder, at 925-600-1331 or email dominiquepiana@comcast.net .

Pleasanton Community Concert Band was founded in 1975 as part of Pleasanton's celebration of the U.S. Bicentennial and has been performing ever since. A true community band, members range in age from teens to those in their 80s, most of whom are local residents. The Band has well over 100 pieces in its repertoire each year, which includes Big Band medleys, Broadway musicals, Dixieland, jazz, ragtime, well-known classics, popular music, patriotic music, and marches. The Community Concert Band sponsors three performances each year, usually free of charge: a holiday concert, a children's concert, and a spring concert, and also perform at the Pleasanton Farmer's Market, Pleasanton Fourth of July Ceremony, Veteran's Day Ceremonies in Livermore and Pleasanton, and other events. Call 925-846-5897 for further information or visit their web site at www.pleasantonband.org .

Pleasanton Playhouse is probably best known for its large musical productions, stage plays, and Broadway Chorus productions. Their 24th season opens with Arsenic and Old Lace September 21 through October 14, followed by Little Shop of Horrors October 19 through November 4. These plays are performed at the group's Studio Theater, a black box studio theatre at 1048 Serpentine Lane, Suite 309, in Pleasanton that seats just 84, allowing for productions of several comedies and dramas each year in an intimate setting. In 2008, the Playhouse will perform its main stage musical productions at the Bankhead Theater: Cinderella in January, The Music Man in April and Beauty and the Beast in July 2008. The Broadway Chorus concerts in December and May are held at the Amador Theater in Pleasanton. Tickets may be ordered online at www.pleasantonplayhouse.com , or by calling 925-462-2121.

Soli Deo Gloria is a San Francisco Bay Area auditioned choir dedicated to the performance of masterworks of the sacred repertoire in a concert setting. The choir's membership is drawn from six Bay Area counties. SDG has been singing since 1975 and been conducted by Allen H Simon since 1991. Recent concerts have included Mozart's C minor mass, Bach's St. Matthew Passion, Mozart's Requiem, an all-Scandinavian program, Respighi's Laud to the Nativity, Handel's Dixit Dominus, The Music of O, Donald McCullough's Holocaust Cantata, Cherubini's Requiem, PDQ Bach's Missa Hilarious, and other great music, with professional soloists and Orchestra Gloria. For tickets and information, visit www.sdgloria.org or call (888) SDG-SONG (734-7664).

Valley Concert Chorale is the Tri-Valley's premier chorus, now in its 44th year. Both the Artistic Director and Conductor John Emory Bush, and Assistant Director and accompanist Daniel Glover are graduates of The Julliard School in New York, and bring extensive musical expertise to the Chorale. The chorus performs three concert sets during the year and hosts a Sing-It-Yourself Messiah each December. Through the years, the Chorale has offered a variety of musical performances to serve the diverse musical tastes of its audiences, ranging from classical to contemporary, and pop to jazz. In March, the Chorale will perform the well-known choral masterpiece Carmina Burana at The Bankhead Theater. The Chorale's youth education outreach program Music in the Schools offers original musical plays to local elementary school children. Call 925-866-4003 for information or visit www.valleyconcertchorale.org .

The Valley Dance Theatre , a non-profit ballet company in Livermore, was founded in 1980 to provide talented dancers with performance opportunities and to bring affordable, quality dance performances to the Tri-Valley. Performances are held twice a year. Each December, the Company presents a full-length production of The Nutcracker, which is second only to the San Francisco Ballet's production in Bay Area attendance. Classical and contemporary repertoires and various collaborations are presented in the spring. Productions are accompanied by the Livermore-Amador Symphony. Call 925-243-0927 for tickets and information or visit www.valleydancetheatre.com .