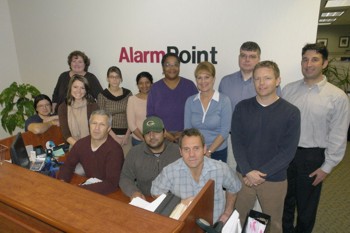 AlarmPoint's Hacienda staff is leading the way in creating sophisticated solutions that notify the appropriate people when systems go down.

Blue Chip Companies and Financial Institutions Depend on AlarmPoint's Solutions to Notify the Right People, Promptly

It's been a banner year for new Hacienda Business Park tenant AlarmPoint Systems. As of October 2007 the high-tech software company, which specializes in automated event notification and resolution, had logged seven consecutive quarters of greater-than-expected booked sales, with all signs pointing to growth continuing at the same rate through the end of the fiscal year (March 2008). In August, the company received an infusion of $7.5 million in Series C funding, split between $4.5 million in equity from second-round investor JMI Equity Fund and $3 million in debt from Silicon Valley's Bridge Bank, N.A.

So what is it that attracts these luminaries? In today's era of "always-on" information technology even the slightest information technology (IT) glitch can have an incredibly high cost. "If an application goes down in a bank, in a matter of a few minutes millions of dollars can be lost," says AlarmPoint Marketing Manager Christel Mes. It's imperative to notify the correct person when system disruptions are happening, which is what the AlarmPoint product suite enables its customers to do.

The complexity of the challenges and environments of AlarmPoint applications can vary greatly-from a strawberry farm in Santa Cruz to the world's largest energy producers. One business requirement remains constant, however: minimizing the time it takes to resolve events by involving the right people. Take the system installed at the Denver International Airport, for example. When an incoming blizzard is expected, AlarmPoint proactively issues emergency-notification messages to 175 key airport personnel in only four minutes.

"What sets us apart is that we've made event notification and resolution a solution," says Mes, her emphasis falling strongly on this last word. "AlarmPoint delivers customers a comprehensive notification solution that speeds resolution on business critical events. Companies all too often depend on broadcast emails hoping someone, anyone, will follow up. Our approach uses sophisticated schedules and subscriptions to ensure the notification reaches the correct person to resolve the incident. The suite is built on a powerful platform that offers self-service personalization for today's mobile workforce, accommodating differentiation in skill level, location, schedule, contact details, and even language.

Anticipating the expansion of its sales and marketing teams, this past July AlarmPoint moved its headquarters from the southern end of Pleasanton into 4457 Willow Road. (The company also has a small development group in Victoria, B.C. and a European office on the outskirts of London.) Since joining the company right around the time of the move, Mes has been focusing most of her attention on preparing for the new product launches that will be announced over the next several months. "AlarmPoint has great vision, products, and customers," she says. "Our roadmap is definitely interesting, and this is an exciting time."