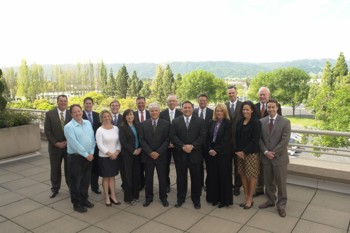 Cornish & Carey Commercial is exhibiting a lot of the same Silicon Valley ingenuity that has brought success to so many local visionaries over the past decades. Having opened in 2000, the Pleasanton office settled into its third location in the business park in February, this time at 4305 Hacienda Drive. All the moves have been the result of expansion.

Expansion might seem counter-intuitive in the middle of a troubled economy, but for many businesses it is a very shrewd move, observes Paul Sheehan, Senior Vice President and manager of the Pleasanton office. "I've been in the business now for 29 years, and I know it goes in cycles," he comments. Expanding and repositioning are often smart things to do during a downturn, and as "a fixture in the Tri-Valley marketplace," the firm is taking advantage of market conditions to prepare for the next wave of activity.

Down markets can be beneficial, and people are just starting to realize the opportunity from both the leasing and purchasing perspectives, Sheehan notes. "This is a good time for tenants to secure a great location under positive financial terms," he advises, adding that rent is not the only financial issue at stake. Other areas that can benefit from a closer look include lease term length, operating expenses, and tenant improvements. "It's all about formulating the best overall transaction to benefit the tenant," he emphasizes.

Founded in 1935 in Palo Alto by two young Stanford graduates, Cornish & Carey has deep local roots that parallel the rise of Silicon Valley. Now headquartered in Santa Clara, the firm has grown into "one of the largest privately held commercial real estate service providers in the world." In 2008 its 200 agents at 11 offices throughout Northern California, from San Francisco to Roseville, leased almost 29 million square feet, sold close to 5 million square feet, and completed more than $1 billion in transactions. The company's affiliation with ONCOR International, an organization of leading brokerage firms on six continents, has led to expansion around the globe.

Even before opening its Walnut Creek office in 1996, Cornish & Carey has had a Tri-Valley presence in its office, industrial, and retail product types. "Seven of the 13 people now in our office have over 20 years in this business, and the knowledge and local experience in tenant solutions or landlord representation is extensive. Plus we have the strength of a solid, local company behind us," Sheehan remarks.

The current expansion includes the addition of executives Chip Wiser and Mark Sweeney, both with long histories in commercial leasing/sales and a special familiarity with Hacienda. Each had previously founded his own firm. Wiser's was ComCore Commercial Real Estate Services, a general brokerage company located in Pleasanton. Sweeney founded Hacienda Marketing & Sales Corporation in 1987 to market the remaining undeveloped land in the park on behalf of Prudential Insurance Company.

For more information about the full range of Cornish & Carey expertise, visit www.ccarey.com .