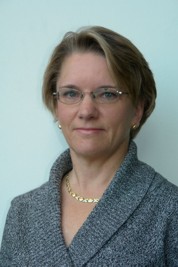 Robin Trembath has a gift for self-expression. She has turned her natural talents for writing, research, arguing, "and a little bit of drama" into a professional life she barely dared dream about when she started practicing law back in 1985. It has been a steady path for the head of the 11-year old firm that just added two partners to become Trembath, Deichler & Hermanson, LLP. It is also something you could expect from a U.C. Davis student who married her high school sweetheart between her sophomore and junior year and still graduated on time, without missing a credit.

Trembath was drawn to litigation while still in college. "I started out thinking I was going to become a genetic counselor, having been interested in genetics for several years," she recalls. When she got to biochemistry as a junior, however, she realized she was in the wrong field. Feeling pressure to "quickly figure out what I wanted to be when I grew up," she sat down one evening and made a list of what she was good at and what she loved to do. "It dawned on me all of a sudden that I might be equipped to be an attorney in the courtroom, something I had never even considered. I signed up for the LSAT the next day."

She loved law school at U.C. Hastings, especially trial practice classes. "I took a summer job with a firm that does insurance defense, and since then I have never seen myself doing anything else." She joined the firm, in San Jose, on graduation and stayed on through 1997. Over that time it had as many as 50 lawyers among three offices. "I was very fortunate to become a partner in 1992, and then later took on the title of 'managing partner' of our Oakland office," Trembath relates.

She also became a mother, with a daughter born in 1989 and a son a few years later. Around that time, she started thinking about managing her life a little differently. The desire was growing "to have a practice close to my home, with the freedom to run the business my way rather than just being an associate down towards the bottom rung of a fairly tall ladder. I dreamed of a little bit of flexibility in structuring my day; and of being able to work hard and receive the benefits, rather than pass them along to those who had preceded me."

Initially, she didn't really think the dream would materialize, but having the vision enabled her to recognize opportunity when it arrived 11 years ago, as the last of her previous law firm's three name partners retired. "The partners with the majority of the voting power decided in a meeting that the firm should split up," and the attorneys were freed from non-compete covenants, she remembers. "I immediately called the insurance carrier that I was doing most of my work for and asked them if they would let me take their East Bay business with me to a new office in Pleasanton. I was so excited to hear that the door was finally opened for me to try to break out on my own, close to my home." Considering her status as a junior partner, it was a "gutsy" move, she acknowledges, but still she was somewhat surprised to find her colleagues more risk-averse.

"I had a hard time finding another lawyer in the firm to go with me, because the junior partners were afraid of taking on a lease and then possibly not having the business flow in as hoped," she continues. Trembath forged ahead, in June 1997 committing to an 18-month sublease for an office in Pleasanton. "I figured I'd make a go of it for that time, and if it didn't work out, I'd find something else to do."

It obviously worked out. Her client, Progressive Insurance, was happy to continue the affiliation. Focused exclusively on insurance defense, the practice has generated mutual loyalty. Notes Trembath, "We've had a terrific working relationship ever since."

Among the rewards is "feeling good about doing the right thing for the clients," policyholders who need legal defense in the wake of an auto or trucking accident. "We put them at ease when they are nervous about being sued, or giving a deposition, or going to trial - which, fortunately for them, is a rarity, really," she points out. Trembath also enjoys good relations with local insurance adjusters, who often call on her for advice.

When it comes to downsides, she confesses that her biggest frustrations are "sometimes getting to where I need to be in the Bay Area and being on time vs. getting stuck in traffic or not finding parking." In fact, a while ago she started writing a novel about a lawyer practicing in the Bay Area who gets so frustrated with the traffic and population density, that she succumbs to the wild dream of chucking it all and moving to a small town.

Was this a subtle attempt for Trembath to get back to her roots? The youngest of three children born in the Bay Area, she was transplanted to Corning, a small town up north, just before sixth grade. "It was probably just at the cusp of being a difficult time to move," she observes. "It was exciting for me to go from all the hustle-bustle to an area where people had horses in their backyard. I liked growing up in that environment."

Her adult dream of rural living has since been supplanted by the success of the law firm as well as an appreciation for the quality of life she and her family enjoy as Pleasanton residents. She recently restructured her work day to spend most of her time in a well-equipped home office. In addition to constant email contact, she stays in touch with the rest of the law firm through daily check-in visits to the office. If she gets distracted during the day, she can always spend more time in the office after dinner or on the weekend "to catch up without being away from home." Her husband, Kerry, a mechanical engineer until 1998, now takes care of the business needs of the firm on a contract basis.

After almost a decade at the southern end of Pleasanton, Trembath moved the office to Hacienda in July 2008. "Our old space was no longer good for us. After more than nine years, it kind of wore out its welcome," she remarks.

Concurrent with the move, Trembath took on the firm's two associate attorneys, Anthony Deichler and Kevin Hermanson, as partners. She and Deichler went to law school together, although they didn't know each other at the time. He hired on with the firm five years ago. Hermanson is relatively new in the field.

As she reflects on what she has accomplished, Trembath notes, "forming a partnership with my two attorneys this past June gave them the full benefits of the dream I had for myself over the past 12 years." She is grateful that she saw the opportunity and grabbed it. "Envision yourself succeeding, plan for the best, and be prepared for the worst," she advises. "That's my motto, and it seems to work."