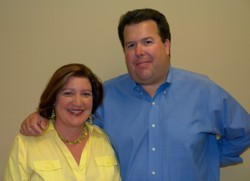 Husband and wife and business partners, Judy Biviano Lloyd and Tim Lloyd may not be exact polar opposites, but they certainly do represent a study in contrasts.

She was raised in upstate New York, and her choice of Clarkson University, even closer to the frigid St. Lawrence Seaway corridor than her hometown, reveals no early urge to escape the snowbelt. He hails from sun-splashed Orinda, and while he reveled in the northern California climate growing up, he eagerly embraced change after high school, heading off to American University in Washington, D.C.

Judy started her professional life in public service as a staff member in the U.S. House of Representatives. Over the next 10 years she held a number of interesting federal appointments within the departments of Labor and Agriculture. Tim has had a foot in the medical environment for as long as he can remember. His father started Nellcor (a Hacienda tenant for over a decade prior to its departure last year), which was a 1980s success story known for pioneering work in pulse oximetry (blood oxygen) measurement. Work there during high school cemented his interest in the field.

Along with their geographic and career differences, the couple proffers contrasting accounts of the naming of their company, Altamont Solutions, which operates in the specialized niche of custom software for healthcare. Tim's version is a simple memory of a park in Livermore, called Altamont, where their son played baseball. Judy's recollection is much more layered. The park association figures in, but so does the built-in name recognition of Altamont as the iconic 1969 music venue. "People say, 'Altamont, I've heard of that,' and the familiarity works to build the brand," remarks Judy, explaining another facet of its appeal: "A lot of software companies have 'technology' or 'computer' in their name. I thought, 'let's find something beginning with A, and we'll be at the top of the list.'"

Judy and Tim were both working in Washington, D.C. when they met, introduced by mutual friends. He had been doing custom software development for a series of medical companies. Judy was still in government. After a stint working for her local congressman, she had secured a federal appointment as Confidential Assistant to the Secretary of Agriculture during the Reagan Administration. A few years later, she accompanied a delegation of U.S. Senators on a post-communism tour of Eastern Europe and Russia during her tenure as special assistant to former U.S. Senate Majority Leader Bob Dole.

Their lives took a double shift in 1996 when they married and Judy started her own wedding and corporate events planning business. Things changed again with the birth of their first and only child, a son. Yet more change was in order when, after more than a dozen years in the nation's capital, the allure of returning to California surfaced as well. "I decided it was time for me to help Tim follow his dream as an entrepreneur," Judy explains, and in 1998 they packed up and moved to Pleasanton. Although they had been out here several times for vacations, she didn't really know what to expect. Tim had been away so long he wasn't totally sure himself. "We knew either we would really gravitate to the area or really miss the East Coast. We find we miss it less and less each year."

A few years after the move, Judy resumed her government career with an appointment as a regional representative for the U.S. Department of Labor. In 2004, she won an award for leading a state investigation that recovered back wages for more than 200 Asian immigrant workers. The same year she traveled to Qatar under Secretary of State Colin Powell as part of a mission to train Arab women for careers in public service.

In the meantime, Tim's work allowed him to participate in every aspect of the software development lifecycle in the health care/life science arena. One of his most rewarding projects was the clinical interface for a system to monitor patients with congestive heart failure for Alere Medical, which resulted in an 80 percent reduction in patient hospitalizations.

The couple started their own business in June 2005. Tim's experience in the software field made for a smooth transition. One of his previous managers opened the door to the company's first assignment, creating a data system for a pathogen-cleansing blood treatment device. The client was a division of DaVita, the largest provider of kidney dialysis worldwide, and there was always something to learn. "It was a great way to start, with interesting problems," Tim says. There was little of the reputed entrepreneurial terror. "We were able to pay the bills on time," he notes, adding, "Business is often built on personal relationships."

By February 2007, Altamont Solutions had grown from two to eight people and moved into a larger office in Hacienda. Then the diversity of projects the company was taking on started to demand more flexibility than a fixed staff could offer. That meant a shift in strategy. "What we do is very specialized. The work can range from creating the interface for a medical device to data communications. We learned to handle expansion by calling on our network of contractors with the skills that meet the project direction," Tim comments.

Recently, Judy has branched off in a few new directions, making use of her own organizational skills and passion to give back to the community. "When Tim started the company, he brought in a wonderful client and was quickly off and running with the software. But there were still some processes to put in place - employee programs, marketing, etc.-and. I joined the company to do that."

With the infrastructure squared away, she now has the time to focus on some of her own concerns. Building on what she learned in government - including a run for state assembly from the 15th district in last year's Republican primary-Altamont Strategies, her new company, orchestrates advocacy and development campaigns for nonprofits. Like Altamont Solutions, it is a specialty niche that fills a clearly articulated need. "Many local nonprofits are really struggling now. They do wonderful things contributing to the community, but when the economy sags, funding diminishes. I evaluate their needs and the systems in place and then create a customized solution so they will have long-term, more sustainable plans. This is something I've been very committed to," she adds.

After 13 years of marriage and four years in business together, the couple has clearly been able to use their differences to their advantage. "Our skill sets are very, very different, but we each appreciate what the other brings to the table. It's a unique collaboration, and it's always interesting," Tim relates. When it comes to dispute resolution, Judy says mirthfully, "I always win," but then quickly gets serious. "I've learned how important it is to know what you don't know. When the issue is something in Tim's bailiwick, we settle it his way."

On the home front, they allow plenty of room for the contrasts. Asked about their favorite getaways, Judy's first response is "the beach, especially the area around Cambria and Hearst Castle." Tim's preference is the mountains - "skiing, hiking, boating in Tahoe." When it comes to helping their son with homework, their differences are predictable: Judy takes reading and writing, while Tim opts for science and math.