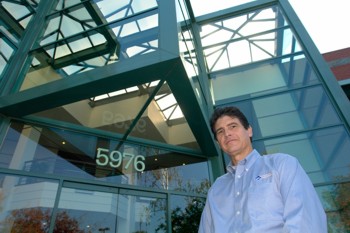 The advent of wireless and VoIP (Voice over Internet Protocol) phone services has brought much discussion about the place of traditional telephone companies in the new communications landscape. A Hacienda start-up, 180SQUARED, is working to help telcos with the software and systems infrastructure they need to transition into a new role as providers of interactive, on-demand television over a closed broadband network, or IPTV.

"The phone companies are reinventing themselves," observes 180SQUARED's CEO Armand Estrada. "That's where our name comes from. We are showing them how to do a 180-degree turn, to a complete new way of thinking. And because of great products like ours, we are able to 'square' their video offerings such that we enable even more revolutionary change. The cable companies already offer VoIP, data, and Internet. We can help the telcos get back in the market with way-better tv."

The vision of this "way-better tv" Estrada proffers is quite intriguing. For example, viewers watching a reality show could use the remote control to vote for a contestant, and then to order and pay for a pizza, without missing any on-screen action. Race car fans could pick a specific driver's helmet camera to follow around the track. Security camera feeds and caller ID information can be displayed on the tv, as can widget buttons for applets featuring the weather or video games.

From a technology perspective, Estrada explains that IPTV uses the Internet backbone, but instead of being available to the general public, it is a closed network. "IPTV streams to the set-top box only what the consumer is watching, and the data pipe is left with so much room that the information flow can be bi-directional. Users will be able to communicate through the tv to servers at the telco, and then communicate with others on the same system. It is real interactive tv. Video conferencing from home will be a reality."

Many of these features are incorporated into AT&T's new U-verse products. Several 180SQUARED employees previously worked at Microsoft, where they played an integral part in the implementation of the IPTV platform at AT&T. As an IPTV software applications developer and system integrator, "our company is one of just three certified systems integrators in the world for deploying Microsoft Mediaroom," a common IPTV platform, Estrada continues. "We work with telcos from the East Coast to Hawaii and from Canada to Mexico."

To become an IPTV provider, a phone company has to buy new computers, switches, and a host of network and access equipment. As part of the deployment process, 180SQUARED designs the architecture, identifies what equipment is needed, implements the IPTV Middleware, and integrates it into the customer's billing and subscriber provisioning systems.

He also points out that, with a few thousand independent telcos throughout North America, 180SQUARED has an extensive prospect base. Add into that the huge consumer appetite for television, and an economy driving at-home entertainment, and it is a very desirable market to be in, he concludes.