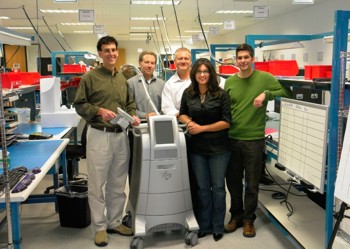 Zeltiq's founders, seen here, have been joined by over 40 employees.

Company's New Approach to Destroying Fat Cells Approved for use in EU, Canada

"The Cool Way to Reduce Fat" is the service mark for Hacienda-based Zeltiq Aesthetics. The venture-backed company could not have chosen a more apt description of its business. Zeltiq is commercializing a pioneering technology called Cryolipolysis(TM), which essentially uses cold (cryro) to kill fat cells (lipo) that the body gradually eliminates through the normal metabolic process. Approved for use in Canada and the European Union, among other international markets, the procedure is the product of "some very creative research dermatologists at the Wellman Center for Photomedicine," the prestigious research institute operated by Harvard University and Massachusetts General Hospital, according to Mitch Levinson, Zeltiq Founder and Chief Scientific Officer.

The patented method uses a sophisticated, computer-controlled electromechanical device to deliver precisely targeted cooling that reaches only fat cells, without harming the skin or other tissue. The non-invasive procedure represents a significant new offering for the growing global cosmetic surgery industry, with no pain or down time and little risk for the patient.

Positioned as a non-invasive alternative to liposuction, and thus an elective treatment, the technology is currently "ideal for fit people who have small bumps or bulges that they can't remove for some reason," says Levinson. For example, right now it has shown to be very effective on male "love handles," the female "tummy pooch," and fat pads in the middle of the back. As Zeltiq progresses, it is pursuing applications for other parts of the body. "Results vary by patient, and by how many procedures they undergo," Levinson notes, "but it is fairly common to see a 25 percent reduction in the thickness of the fat layer in a single procedure."

While he might be hard pressed to assign a dollar value to the amount of business Zeltiq can expect to capture, "nobody we ever talk to wonders if the market is big enough," Levinson quips. Up until now, there has been virtually no market for non-invasive fat reduction, simply because no other approach worked well. But with cosmetic surgery no longer just the province of celebrities and the wealthy (total U.S. spending in the overall category came close to $12 billion in 2007), the company's prospects are bright. "Our offering is really pioneering. There is no other technology on the market that does a good job," he emphasizes.

Having started in an office sublet in Hacienda in 2005, Zeltiq now occupies its third home, at 4698 Willow Road. The company moved into 17,000 square feet on one side of the building in January 2007. About a year ago it added another 7,500 square feet on the other side of the lobby to accommodate a workforce of approximately 50, including a full research and development team and all other business functions.

Global commercialization began with the installation of the first Zeltiq unit in Hong Kong in May 2009, and the phased launch is now expanding into other countries. "Times are tough for companies that rely on venture capital funding," admits Levinson, "but we are fortunate to have a dynamite product for a large industry with some very solid financial backers." Stay tuned to the company's progress at www.zeltiq.com .