2010 Census Will Provide 'Snapshot of America' 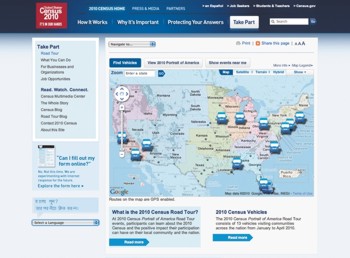 It may be hard to believe, but the United States is entering its fourth century of census-taking.

The first decennial census was conducted under then-Secretary of State Thomas Jefferson in 1790, as prescribed by the Constitution. Since then, the census has been taken in each year ending in a zero digit. The most recent, Census 2000, was the last of the 20th century, so the 2010 count signals a new era.

This modern-age census reflects an embrace of technology with regularly updated Twitter, Facebook, and YouTube pages. The undertaking is also being promoted with a national road tour and a "Portrait of America" blog. Still, it is a few years away from being Internet-ready - although experiments with an online format are in process.

In the meantime, the mechanics of distribution will be similar to past efforts. The census forms will be delivered to every residence in the United States and Puerto Rico in mid-March. With one of the shortest questionnaires in history, the 2010 Census asks simply for name, gender, age, race, ethnicity, relationship, and whether you own or rent your home. It takes about 10 minutes for the average household to complete.

April 1 has been designated National Census Day-a country-wide reminder that it is time to complete the forms, put them back in the postage-paid envelopes provided, and mail them to the processing center indicated.

Residents who fail to send back a form may receive a visit from a census taker from late April through July. The Census Bureau makes a point of advising the public to ask for identification before engaging with the representative. "All census workers carry official government badges marked with just their name; they may also have a 'U.S. Census Bureau' bag," says the web site, adding the reminder that census takers will never ask to enter a home.

It is difficult to underestimate the importance of making a complete count. According to the Census Bureau's web site, "An accurate Census helps provide future generations with the resources they need." Responses to the 2010 Census questionnaire are required by law. They are used for statistical purposes only, and are strictly confidential.

Census population totals determine which states gain or lose representation in Congress, as well as the allocation of billions of federal dollars. Locally, these funds were used by Axis Community Health to build a new women's clinic and remodel a pediatric clinic. Federal grant funds are also dedicated to housing services, low income senior housing, the Spectrum low-cost lunch meal service for seniors, and the GRID Alternatives program, which funds the installation of solar panels for lower-income households.

By law, the Census Bureau will deliver population information to the President for apportionment in December 2010.