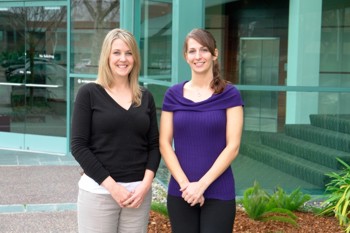 Hiring activity is one key indicator of business health, and Kelly Faber and Sarah Summers, who co-manage Culver Careers in Hacienda, have some upbeat news to report - not only on behalf of their clients, but within their own company as well. The recruiting firm, one of the largest privately-held agencies in the nation, smartly cut back on staff and consolidated branches when the economy began to contract. This month, however, Faber and Summers are welcoming two new recruiters to the northern California regional office, at 5994 West Las Positas, as they see their clients' interest levels starting to rebound.

"For Culver Careers' first 25 years, the focus was on sales recruiting - local, regional, and national," says Faber, who has been with the firm for the past six years. "But when the economic downturn hit, we opened ourselves to all opportunities - positions in engineering and operations management, for instance, and not only nationwide but even outside the country."

They made the transition the old-fashioned way - through hard work, research, and fresh thinking. "We moved beyond our comfort zone and we are constantly pushing forward," Summers comments. "I've learned so much recruiting for positions outside of the areas I already knew about, adapting and staying positive."

Adds Faber, "You can't have a doomsday attitude in this economy. Business might have dropped off, but companies are still hiring. You just have to 'reload' and get more creative with marketing and candidate generation."

Both point out that there are many open professional-level positions to fill, despite news reports emphasizing lay-offs. "For the most part, the media only show one picture of the employment market. It's true that the Bay Area took a hit, but I have several clients that never slowed down their hiring this year," Faber says. "Companies have been running with a skeletal infrastructure for such a long time. They can't continue that way and keep up with their competitors as the economy picks up."

Asked where they see the most activity right now, the reply is "anything to do with technology and online platforms." The field of telecommunications is making a big push again, and demand in medical sales is still high. "Those companies seem to be the least affected," Summers remarks. "That's the nice thing about being in sales recruiting. Sales people are usually the last to be let go and the first to be rehired."

Faber and Summers both agree that their co-managing relationship has proven to have benefits beyond simply lowering overhead. The duo had worked together in the Hacienda office before Summers was promoted to lead the Walnut Creek branch. When that location closed, Summers moved back to familiar territory, and she and Faber decided to merge their responsibilities."All of us in the office work completely together anyway, so it just made sense," says Summers. "There are some aspects of the business where one of us is stronger than the other," Farber continues. "This way we can easily share ideas-and share the weight of managing the office."