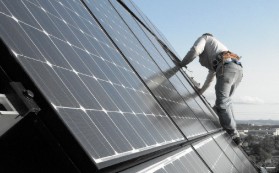 Solar energy has changed significantly since the first solar panel was sold in the U.S. more than 30 years ago. For one thing, instead of the fringe notion it was back in the late 1970s, today solar power is a hotbed of growth, a technology in the limelight. In the residential arena, solar panels are no longer the environmentally friendly upgrade found only in upscale neighborhoods. A combination of federal and state subsidies, municipal grants, and utility company rate-payer fees has bridged the economic divide, making this form of renewable energy available to lower-income homeowners as well.

GRID Alternatives, an Oakland-based nonprofit with an expanding California footprint, has stepped up to take a leading role in the effort to bring the benefits of solar power to the people who might not otherwise find it affordable. Founded during the state's 2001 energy crisis by a pair of engineers working on renewable energy in the private sector, GRID pioneered a model to make solar technology practical for the households that were hardest hit by escalating energy prices.

Pleasanton has an active SASH program, with GRID's Colin Bright serving as Outreach Coordinator. Bright has spent a few years working closely with city officials, Housing Specialist Scott Erickson in particular, to identify prospective candidates for the program and pull together the various funding sources that ultimately allow lower-income families to have a solar energy system installed at no charge. Community development block grants finance a portion of the installation, while a larger share is paid for by the California Solar Initiative, a rebate program supported by the state's public utilities. "There is $108 million set aside from the PG&E ratepayer fund for this, available on a first-come, first-served basis throughout the state," Bright explains.

"Pleasanton is at the forefront, one of the first adopters to bring this program to the community," he continues. Four systems were deployed here in 2009, and Bright hopes to do "many more in 2010." A recent grant from Hacienda Helping Hands will contribute toward reaching that goal. In addition to navigating through the paperwork, GRID provides assistance designing and sizing the systems, each of which is unique due to variations in a home's roof space, orientation, energy demands, and similar factors. "The systems we install are grid-tied," says Bright. "Solar is not the end-all solution," but it does help reduce the overall need for coal powered-plants, he points out.

The opportunity for community engagement is another key part of the program. After going through training in solar basics and safety, volunteers assemble to help with the individual installations, usually over a weekend. "It's like a barn-raising," quips Bright - a great way to "bring people together for a good cause." It is also a good outlet for corporate sponsorship, he notes, inviting Hacienda companies to consider forming their own volunteer teams. For more information, visit www.gridalternatives.org .