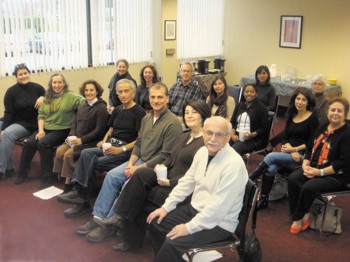 Hacienda Branch of London-Based Organization Brings Plato, Other Thinkers to the Masses

After opening its doors in Hacienda in September, the School of Practical Philosophy is gearing up for a second term of classes in its new location this month. The school offers an unusual curriculum that addresses some of the most perplexing questions of the ages: self-knowledge, the discovery of inner peace, and principles for a happy life.

"People don't have a place in their lives for finding the treasure inside of them. It's all here in each of us, but we are always looking somewhere else, as though searching for a forgotten thing," relates Mariam Safinia, who established the school's northern California center in 2004.

Safinia's recollection of her own first Practical Philosophy class, in London back in 1989, reflects the self-discovery and clarity of thinking to be gained. In the midst of business and personal turmoil at the time, she was inspired by a tiny magazine ad to try out the introductory course. She approached it seriously, showing up "power dressed, clip board in hand, and taking a seat in the front row." However, the first thing that caught her attention was the tutor's mismatched socks, and she couldn't help staring. Eventually, though, the distraction was replaced by the tutor's voice and the text he was reading, and she became completely absorbed. "I sat up and realized I had never heard words put together quite that way. It made such sense, like the right pieces of a puzzle coming together." A subsequent meditation exercise made her aware of the jumble of thoughts in her head that prevented her from focusing on any one thing. "I realized I was carrying this background noise around all the time, and I never knew it." From this epiphany, she perceived the need to change her life, as well as the way to do it.

Over the next 15 years, Safinia followed the curriculum, became a tutor herself, and put her life back on track. When she turned 60, she and her husband moved to California to be near their children and grandchildren. "We figured we had made enough to live on, and now it was time to pay it back-or, more accurately, pay it forward." She started the northern California school with a small class in Fort Mason, expanded to Palo Alto, and then, last September, found a permanent home for the school at 5960 Stoneridge Drive.

The classes follow material drawn from Platonic wisdom, Judeo-Christian spirituality, and the Vedantic tradition, developed by the school's London headquarters. The focus is not on academics but rather on what Safinia calls "proposing," with a strong emphasis on the notion of "attending" and its sense of being present and caring as a means to "harness the infinite power of the mind." As she explains, "When you bring that attention to any job, even slicing cucumbers for a salad, it becomes a joyful activity. If you are distracted, it is stressful, but if you can bring all of yourself to whatever you are doing, life becomes quite wonderful."

Operating as a 501(c) 3 nonprofit, the school is supported by a staff of trained volunteer tutors and currently has more than 100 students locally. For more information about the latest sessions, visit www.practicalphilosopher.org or call Mariam Safinia at (925) 828-8695.