C.H. Robinson Worldwide's Diane Lujan: At the Top of Her Game 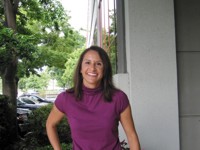 Time flies in the Hacienda office of C.H. Robinson Worldwide. A global leader in third-party logistics, C.H. Robinson provides freight transportation solutions to businesses of all sizes around the world. While the local branch serves a variety of industries, much activity comes from two types of customers: the alternative energy sector and food and beverage manufacturers. Both have exacting needs.

"We work with many of the groups that install solar panels," says Diane Lujan, the Pleasanton branch manager. "The shipments are going to job sites, and we have to be at the top of our game to be sure they arrive on time and in perfect shape."

The demands are similar in the food and beverage arena. Not only are many shipments perishable, but timely receipt of goods is critical for merchants. "If stores do not have product on their shelves, they will lose sales," Lujan observes. Frequently, a perfectly executed delivery will help a customer land a new account, so there can be a long cascade of repercussions to each transaction.

In this ever-shifting landscape, Lujan and her team constantly run into last-minute changes, often due to circumstances beyond their control. "In our business we can never be sure that everything will run smoothly. We always have to anticipate what could potentially go wrong."

Lujan thrives on the roller-coaster atmosphere. "I like the constant ups and downs. Just when we figure out solutions to one problem, the next minute something else comes up that we have to deal with." But when she leaves at the end of the day, it is always on a positive note. "You look back and see what you've accomplished, and it makes for great day," she reflects. "I am never bored."

The discovery of how much she enjoys her work is, in fact, one her biggest business surprises. "When I was in college, I never realized that you could have fun at work," she admits. Now she knows that it is not only possible, it happens often, and it is also healthy. "We have very stressful days here, but when we have a good laugh, it lets off steam and brings everything back into perspective. That makes for a more energetic and productive atmosphere for everyone.

"I like to think of the office here as my second family," she continues. "There are 15 of us total in the office, and we have fun every single day."

THE IMPORTANCE OF FAMILY

It is no accident Lujan invokes the family analogy; as the youngest of five children, it's an environment with which she is quite familiar. Although the siblings - two girls, two boys, and then Lujan-are widely spaced in age (almost two decades separate her from her oldest sister), they all remain very close.

"Family is very important to me. I was brought up in a stable, loving family, in Phoenix. It might sound boring, but I have no complaints." The stability has endured. The senior Lujans just celebrated their 60th wedding anniversary, and at age 84 her father continues to teach high school math, only now as a substitute. "It might be a little harder for him to walk around campus and relate to the kids, but teaching is 'in him,' and he's as sharp as ever," his daughter comments.

As adults, the three oldest offspring left Arizona for Michigan, Florida, and Oklahoma, but Lujan's older brother David chose to stay close to home. An attorney and long-time advocate for children, he was elected to the Arizona State House of Representatives in 2005 and is now running for attorney general.

Lujan herself knew she didn't want to settle too far from her home base. When she graduated from the University of Arizona with a degree in marketing, her career vision had not yet crystallized. She spent a few years in jobs that were not terribly satisfying, and then she found C.H. Robinson. Undeterred by the fact that she would be only the second woman in an otherwise all-male office, she joined the Phoenix branch as an account manager. "It was a perfect fit for me. The people I worked with in that first office felt like family from the beginning."

The independence afforded by her position was also very appealing. "I was empowered to run my own show," she recalls. "It was very exciting as a younger person to have a portfolio of accounts and earn the confidence of my manager to grow the business."

She clearly remembers her first sales call, out in the field with her manager, a natural-born salesman with the nickname Big Daddy. "To this day, that is not me," Lujan professes, "but I learned that the way to be successful is by establishing relationships with other people and being attentive to their needs. The best part is that you can do this while still being yourself. Being genuine goes a long way."

After three years in C.H. Robinson's Phoenix office, the opportunity to transfer to Northern California presented itself. Having fallen in love with the Bay Area during a spring-break trip back in college, Lujan jumped at the chance. "It was a good move on my part," she says, noting that she continues to be challenged on a daily basis. "I learn something new every single day, and that keeps me highly motivated to achieve."

As branch manager, she is passionate about fostering the success of her team - which now numbers six men and nine women. "I have a great group of people working for me. Some of the younger ones are looking to start families and preparing for the next step in their careers. My job is to help them see their way to success."

Asked about the most important leadership lesson she has learned, she replies, "You have to check yourself a lot, so that all the things you are supposed to be doing, you are actually doing well."

She also talks about the importance of being present. "It's one thing to tell the team that your door is open for them, but if I'm not paying attention when they are communicating, I am not being a good leader. The people on my team are very capable of doing things on their own without my meddling, but when they need things, I have to be present."

The other side of the equation is, of course, the market. For Lujan, the bottom line is that "customers need to have confidence in us to deliver products on time and as needed." In addition to the bench strength the worldwide C.H. Robinson organization offers, "we anticipate what could potentially go wrong, and we fix it. That's why we're good at what we do."

To unwind, Lujan, who lives in Oakland, likes to get out by the water, run, or hike, often accompanied by her spirited black lab, Murphy. For inspiration, she taps the support system of fellow managers within the company, who share success stories and words of wisdom. She also has a network of carefully chosen friends she can turn to for honest advice. She likes to travel, but right now her spare time is spent training for her third half-marathon. "It's something to strive for," she remarks-and something else that keeps her at the top of her game.