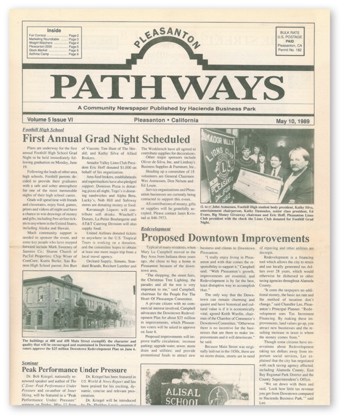 What was happening in Pleasanton in the summer of 1983?

The girls' under-16 soccer team returned victorious from the Western States Championship in Denver. The Pleasanton Cultural Arts Council launched a campaign to renovate the high school's Amador Theater. A fire truck, on hand to celebrate the opening of a new section of West Las Positas Blvd., between Santa Rita and Hopyard roads, wound up zooming through the ribbon on the way to an emergency. Residents were concerned about the availability of good local jobs that would keep the next generation close to home. A new computer, almost the size of a dog house, had just been installed to regulate traffic lights throughout the city.

And although many communities in California were grappling with a financial crunch after the 1978 passage of Proposition 13, Pleasanton was in an enviable place. Wise moves by the City Council had averted the need for severe cutbacks in the wake of reduced property tax revenues, but, even more important, the long-term plans for Pleasanton's future growth were starting to bear fruit.

All of this information is recorded in the inaugural issue of Pleasanton Pathways, dated July-August 1983, and now available online in a new Hacienda archive. Published by Hacienda for tenants and residents of Pleasanton. Pathways was originally intended to come out once a month, but its popularity - and the news volume-eventually turned it into a bi-monthly publication. Long-time local journalist Lilly Ault took the editor spot in the second issue, and for almost a decade Pathways chronicled the community's progress in many of the areas that give it such a desirable quality of life-infrastructure, education, philanthropy, sports, the arts, healthcare, and a strong business base.

A significant thread in these developments has been Hacienda itself. The 1983 West Las Positas extension was funded by park co-developers Prudential Insurance of America and Callahan Pentz. New Hacienda tenant Crum and Forster Personal Insurance began a recruiting drive that October, while the impending move of AT&T Long Lines from San Francisco promised shorter commutes and many more jobs. The computerized traffic flow system, initially envisioned to operate only within the confines of Hacienda, would undergo gradual city-wide deployment at the recommendation of transportation consulting firm TJKM. The income from North Pleasanton business development eased the city's financial crunch, facilitating completion of flood control measures, improvement in fire protection, staffing additions in the police department, even restoring power to all city street lights.

Pleasanton Pathways, which used to go to every home in the city, ceased publication in 1992, succeeded the following year by NETWORK. However, Pathways still lives on in the archive available on the Hacienda web site. When you feel the urge for a stroll down memory lane, go to www.hacienda.org and select Hacienda Online! from the Reference menu. Pick the Pathways option, and you will have access to eight years of issues, with more to follow soon. It is good reading, and the stories told nearly three decades ago about the city's accomplishments provide an important sign post for the community we have today.