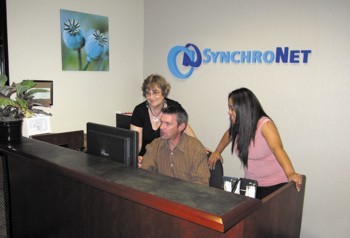 Shaken by the economic downturn, container shipping is bouncing back. According to one mid-May analyst report, the idle fleet is now at a 15-month low, and box carrying volumes are four percent higher than in the first quarter of 2008. A number of carriers who were previously losing money returned to profitability in the first quarter of this year.

Still, the global transportation industry's normal trends in equipment flows and capacity, in place for many years, have dramatically changed, observes Barbara Marsh-Wetherell, Chief Marketing Officer, SynchroNet, which has built its business on providing cost-saving solutions for container repositioning.

"There just is not the amount of container manufacturing and container interchange going on the way it used to," Marsh-Wetherell comments. In 2007-08, orders for new ships and containers were the highest ever. That produced a huge fleet at a time when global trade demand diminished sharply.

"That trend hit us hard," Marsh-Wetherell continues, but at the same time it placed additional value on repositioning services,. Empty containers represent one of the largest costs of shipping, and they are never going away. "There may be fewer to deal with now," she points out, "but people are always looking for ways to avoid spending money shipping air."

To take advantage of the opportunities, last October SynchroNet Marine turned an existing division into a sister company, SynchroNet Intermodal Services Inc. (SIS), devoted to the North American side of the business. "SIS provides opportunities for container owners and users to economically reposition empty equipment throughout the U.S., Canada, and Mexico," Marsh-Wetherell explains.

With technology that tracks more than 350,000 containers at 40,000 locations in 88 countries around the globe, SynchroNet Marine and SynchroNet Intermodal help customers find an empty container-or someone who wants to put something in it-and arrange its transfer to the desired location. "The typical question is how to get a container in Chicago or Dallas to a port on either coast," she relates. Often, the containers wind up on a stack train. Second choice is on a truck. "Trains are more carbon-efficient, but we work with truckers, trains, and ocean carriers to move these containers all around the U.S," she says.

Concern for the environmental impact of container transport is evident in the company's tag line, "reducing global emissions since 1996," the year when SynchroNet Marine was founded. "Everyone talks about being 'green' today, but long before it was in fashion, we were a forerunner in the sustainable transportation of goods-by maximizing container efficiencies and decreasing carbon emissions," Marsh-Wetherell remarks.

Originally established in San Francisco, SynchroNet moved to Hacienda in November 2007. Ten full-time employees, along with a small group of contractors and consultants, work in the 3,250-square-foot facility, in the executive offices and finance, marketing, and IT departments. The location has proved convenient for the company's many customers, both international and domestic, who visit San Francisco for business. For more information, visit www.synchronetintermodal.com .