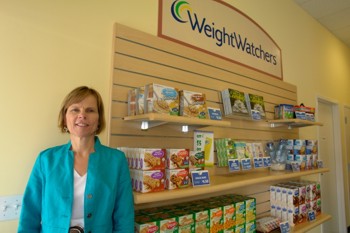 When people think about Weight Watchers, they typically home in on images of eating and dieting. Yes, the program is about weight loss, says Territory Manager Jeanne O'Brien, but it encompasses so much more.

"Weight loss isn't necessarily just about food," O'Brien insists. "It's about changing how you relate to food in all kinds of situations, changing all those habits you've had for years."

Describing her role for the 45-year-old, New York City-based company, which opened a new facility at 4811 Hopyard in January, O'Brien says, "I inspire people to turn their lives around." When people lose weight, she explains, "there are so many other wonderful transformations. That is our business. We're about having a healthy lifestyle."

The pragmatic appeal of weight loss is especially timely in a tight economy, she points out. "There is a lot of value in what we do. In the long run, you will benefit in so many ways - saving money on health care, for example - because you have developed healthier habits." For job-hunters, "this is a great way to take time for yourself while making yourself more marketable."

Two primary and intertwined features set Weight Watchers apart, according to O'Brien. The first is that the weight loss program is based on science and proven to work. The other is support. "Almost everyone recognizes what to do for weight loss: you cut back on calories and exercise more," she remarks. The concept is simple; the execution is the challenge. "People need support through the process, and that's where we excel. We know members who attend meetings lose three times more weight than those who go it alone."

At the heart of the program are the weekly meetings, which cover topics from food plans and eating advice to encouragement, such as the current campaign to get members to participate in a 5k walk. The weekly weigh-in is the moment of truth for monitoring progress.

Even when members achieve their target weight, they still need support. That is the function of the maintenance phase. All Weight Watcher employees are very familiar with this part, since successful participation in the program is a job requirement. O'Brien herself shed 35 pounds attending Weight Watchers eight years ago, and has maintained that loss. Keeping the pounds off is "a huge piece" of the program, she says. People who have hit their goal can become lifetime members, which means they can continue to attend meetings at no cost as long as they stay within a couple pounds of their weight goal.

"That accountability, just checking in, is a huge factor in maintaining the weight loss. We have members who have been with us for 30 years," O'Brien comments.

The program can also fit into the workplace. "We are already bringing the Weight Watchers meeting to some companies in Hacienda," she reports. For more information on becoming a member or having a Weight Watchers At Work meeting at your company, business park occupants are invited to a special open house on Monday evening, July 12. RSVP to Jeanne.obrien@weightwatchers.com , or call (800) 651-6000 for meeting schedules.