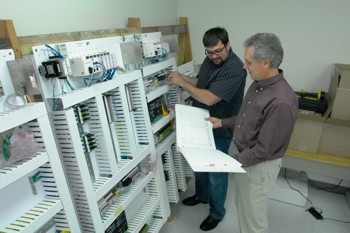 Matthew Trombi, left, and Dieter Schulze look over the schematics for a new process control system.

In keeping with its status as one of the nation's 5,000 fastest-growing privately held companies, according to the heralded 2009 list from Inc. magazine, Hacienda tenant Wunderlich-Malec Engineering continues its steady upward trajectory. So far this year, the Minnetonka, Minn.-based firm has announced new or expanded offices in Las Vegas, Nev.; Columbus, Ohio; and Greensboro, N.C., producing a current total of 18 locations across the country.

From 2005 to 2008, the firm's annual revenues surged from $38.1 million to $42.1 million, generating a growth rate of 10.5 percent. Its expertise in systems integration and process control remains in high demand among a wide range of industrial sectors looking to streamline operations through finely tuned and highly robust automated systems, from mining and manufacturing to oil and gas to pharmaceuticals and power plants.

"We provide a mix of engineering and design capabilities, and have extended that to include public sector projects as well as work in high tech, life sciences, and data centers," says Dieter Schulze, business manager at the Hacienda branch, which last summer moved into freshly customized quarters at 5934 Gibraltar Drive, after nine years around the corner on W. Las Positas Boulevard.

"We were able to reconfigure the layout of the offices to better meet our needs in the new premises, and we also expanded our test lab area," says Bill Storey, business development manager. The branch has a current employee population of 13; its rapid growth has triggered an initiative to add experienced controls engineers to its staff. "Our projects are interesting and challenging, and people are very comfortable sharing information back and forth," Storey remarks.

Schulze has been with the company since the Pleasanton office first opened in 1995. Storey came on board in 1999. Unlike many engineering firms, where employee movement or turnover can be high, Wunderlich-Malec has proceeded along a very stable path.

"A lot of people in this office have been here for more than 10 years," says Schulze. "I've made a point of building a team that stays together. Long-term relationships make a team much more effective."

The branch also has a long history with many of the companies in its client base, serving some of Silicon Valley's most legendary names, like tech giants Intel and Applied Materials, as well as rising stars like Solyndra, the pioneering Fremont manufacturer of photovoltaic systems for the commercial rooftop market.

Wunderlich-Malec has completed numerous projects for the local Zone 7 Water Agency, designing and replacing the entire controls system to integrate multiple sites, afford redundancy for emergency operations, and improve water quality reporting. Most recently, the firm designed the controls for the agency's groundwater demineralization plant, at the corner of Stoneridge Drive and Santa Rita Road.

The office currently has a large contract with the Santa Clara Valley Water District for the engineering and control panels used in drinking water distribution systems in the South Bay. Reliability is a key issue. "Everyone expects their water to be on at all times," observes Storey. "In the background are critical control systems to ensure that performance. That is what we provide." For more information, visit wmeng.com .