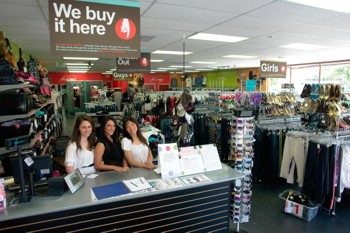 The constantly-changing inventory of Plato's Closet is just part of the store's appeal.

It might be surprising to learn that Hacienda has all the right characteristics to support a retail store targeted at teens and young adults of both genders - but it does. The store is Plato's Closet, a resale shop that bills itself as "the hippest, hottest retail franchise concept in the industry."

According to local store owner Linda Fong, it is not a concept that would typically fit in a mall, but to reach its customers, it has to be close to one. Schools and residential areas should be nearby, and the right blend of neighbors enhances visibility.

Commenting on her location at 4555 Hopyard Road, Fong notes, "I like being in the Crossroads center." The mix of retailers - which includes restaurants, an optometrist, and a tailor - is "very synergistic." While the store has a loyal following, the other shops in the center help attract foot traffic. A corner location with two giant picture windows boosts exposure. All features combine to make it an excellent site.

Fong first opened Plato's Closet in Dublin in 2005. As the business caught on, her 2,600-square-foot space seemed to get smaller and smaller. Last year the search for new quarters took her to Crossroads Suite 26, which faces Inglewood Drive. She decided to take advantage of the opportunity to grow another 20 percent, and moved the store last May.

The franchise itself is 11 years old, part of the portfolio of Minneapolis-based Winmark Corp. Winmark is a pioneer of the retail-resale concept, described as the "'ultra-high-value' retailing niche - selling high-quality used products alongside new goods in a traditional retail store format." Its first entry was Play It Again Sports; subsequent hits include Music Go Round, Once Upon a Child, and Plato's Closet. The clothing and accessory store was reputedly named for the philosopher's dislike of waste, Fong confides.

Recycling is one of the appeals for Plato's Closet demographic. So is the prospect of dressing fashionably while saving as much as 70 percent off mall prices. The icing on the cake is being able to get money back from items that have fallen out of favor as the store buys customer cast-offs. As Fong remarks, "What teen-ager would not love to get a little cash for her clothes? They wear things once or twice and get bored."

The frugal approach does not mean that Plato's Closet buys just anything. There's a mandate, carefully supported by corporate training materials that change every season, to trade only in certain brands and styles, nothing more than six months old.

Asked what is really hot right now, Fong replies, "We can't get enough good guy stuff." Accessories are really popular-there's no worry about fit. And skinny jeans are in for girls. The store also carries shoes, purses, books, and DVDs - "as long as they match teen-age tastes," Fong quips.

As hip as its in-store merchandising is its online strategy. Plato's Closet has an active Facebook page that regularly announces special promotions. Visit www.facebook.com/PlatosClosetPleasanton for a closer look.