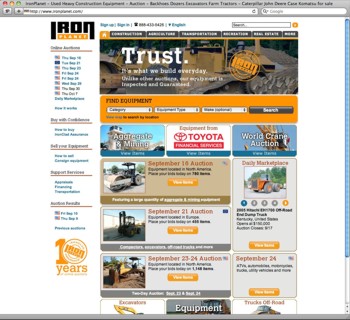 Iron Planet's web site provides buyers around the world with access to the company's auctions.

Ten years of steady growth have propelled Hacienda's IronPlanet into a prime position on the cusp of an initial public stock offering. Founded in 1999, at the height of the dot-com frenzy, the online auction site for used heavy equipment was built on a solid foundation with a sound value proposition, both of which have given it obvious staying power.

The company's sales figures have followed an enviable trajectory - upward all the way. In its first five years in business IronPlanet auctioned off $340 million in equipment. By 2008 it hit that same sales volume in just one year. In 2009 the annual total surged to $450 million, a year-over-year increase of 34 percent, notes Chief Technology Officer Jeff Barca-Hall. While the date for the IPO has not yet been set, Barca-Hall reports that it will happen "as soon as practicable." Taking this significant step in the company's evolution is "an exciting time for us," he comments.

The business model for IronPlanet's online auctions is based on a few key differentiators, one of which is a granular inspection process that offers buyers a trademarked IronClad Assurance on the condition of their purchase. Buyers are guaranteed that what they see in the inspection reports is what they will get when the equipment is delivered. "I think it's very rare to spend up to $100,000 for something sight unseen, so from the very beginning we've worked to instill trust in the transaction. Our IronClad Assurance allows buyers to make very significant purchases with confidence, in a completely online manner. You won't see that anywhere else," Barca-Hall remarks.

The company's resounding success also derives from a very flexible technology infrastructure that replicates the efficiency of the physical auction experience, bringing buyers from all over the globe together in real time to let them establish the current market value of an item. "Our auction technology can also be used by sellers directly via the SaaS, or Software as a Service, model, delivered over the Internet, so they can conduct private auctions themselves," he relates.

It can also accommodate a variety of asset classes, and IronPlanet has been progressively exploring that capability to expand into new auction categories. Initially, the company's auctions were targeted to the business-to-business marketplace, featuring used heavy equipment like backhoes and bulldozers. The list of categories gradually grew to include more specialized items such as cranes, large mining machines, and farm equipment.

"We've also moved into transportation in the last few years-highway trucks, trailers, buses," Barca-Hall says. From there it was a natural progression to areas like luxury cars and motorcycles. "Harley-Davidsons are good sellers, and we've added a power sports category for boats and ATVs. These categories are our current focus for expansion, but we may expand into additional areas. We're always looking at what makes sense."

To keep up with its dramatic growth, IronPlanet just completed a 3,500-square-foot expansion to its headquarters at 4695 Chabot Drive. The Hacienda location, between Silicon Valley and the Central Valley, the agriculture hub and home of Caterpillar's founding family, is a fitting choice for a company with roots in both high technology and heavy equipment. "IronPlanet represents the same marriage, bringing technology to the equipment marketplace," Barca-Hall points out.