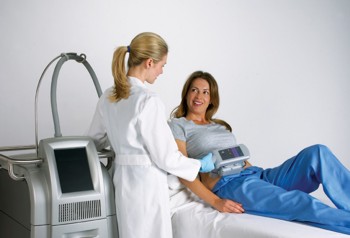 ZELTIQ's CoolSculpting uses extreme cold to destroy fat cells beneath the skin in a non-invasive procedure. (Photo courtesy of Zeltiq.)

At first glance, the soaring success of Hacienda's ZELTIQ might seem counter-intuitive. Introducing a novel elective aesthetic procedure in the middle of an uncertain economy could be seen as questionable, but market reception says otherwise.

As it turns out, ZELTIQ's breakthrough, CoolSculpting, is exactly what consumers have been wanting. The proof can be found in the expectations-exceeding results the company continues to enjoy since it received U.S. Food and Drug Administration (FDA) clearance for the procedure and launched it domestically last year. (ZELTIQ had previously obtained approval for use in selected countries abroad.) By the end of 2010, over 35,000 patients worldwide had opted for CoolSculpting, and the company's employee headcount doubled to 100. Anticipating a subsequent 50 percent growth spurt throughout 2011, over Christmas ZELTIQ added another 18,000 square feet to its headquarters at 4698 Willow Road. "All the metrics we look at and worry about are up 'into the right,'" remarks CEO Gordie Nye, referring to the increasing demand for CoolSculpting that is fueling the growing business.

The explanation behind this upsurge lies in the nature of the innovation. CoolSculpting is the non-invasive reduction of exercise-resistant fat bulges. The process, dubbed Cryolipolysis, painlessly and permanently destroys subcutaneous fat cells in targeted areas by exposing them to extreme cold.

Nye sums up the value proposition this way: "This procedure is very differentiated inside the walls of most medical practices for its patient friendliness, novelty, absence of downtime, and the fact that it is very fairly priced. In this economy it is very important in the minds of many patients not to introduce time away from work just to heal up."

Acknowledging that, as an optional measure, CoolSculpting is not subject to insurance reimbursement, Nye points out that the total dollar commitment is significantly lower than liposuction or other procedures. Its efficiency is an aspect ZELTIQ continues to refine. Released in October 2010, a newer, larger applicator, the eZ App 8, can treat 2.5 times the surface area in one hour. This represents "an important add" for practitioners, allowing more procedures to be performed per day. "The future pipeline of applicators follows the same idea," he says.

There is no better case in point testifying to the technique's surprising popularity than the utilization rates in metro Detroit, Nye continues. Despite the region's economic devastation and unprecedented drop in population, the area is home to the most successful CoolSculpting Center, Allure Medical Spa, whose five CoolSculpting units deliver hundreds of procedures each week. "I was just there visiting, and they are busy all the time."

Nye is also careful to mention that CoolSculpting is not the silver bullet cure for obesity. Practitioners typically have a weight or BMI cut-off, drawing the line at patients who are 15 to 20 pounds over ideal weight. While scientists find Cryolipolysis "very interesting" for reducing the deep visceral fat that surrounds the body's organs, "this is not an endeavor for ZELTIQ." Given the company's current performance, with installations in more than 300 practices in 22 countries around the globe, that application is hardly necessary for an expansive future.