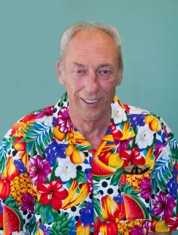 As the owner of Maui Wowi Hawaiian Coffee and Smoothies, which opened in Gateway Square in June, Lloyd Barnes may be new to Hacienda, but he is no stranger to business. The local Maui Wowi had built up quite a following in its original Dublin location over the past four years. Even before an expiring lease prompted the move, however, Barnes was the veteran of a decades-long career as a hands-on manager, turnaround artist, and accomplished entrepreneur.

Throughout, his high energy and innate talent as a people person have been a linchpin of his success. Barnes has often been asked about the formula that enabled him to consistently execute while moving up the ranks, whether working for others or for himself. There is no secret sauce, he avows, other than his adherence to the Golden Rule and the even-handed way he deals with others. "I would never ask an employee to do something I wouldn't do myself," he remarks.

He has repeatedly demonstrated his ability to make the most of a situation. One of his earliest life-shaping events was the twist of fate that marked his graduation from high school in Denver. A baseball scholarship awaited him at a college in Topeka, Kansas, but it was the time of the Cuban missile crisis - and the draft. "The army wanted me to throw hand grenades instead of baseballs," he quips. Pre-empting his draft notice, at age 17 Barnes enlisted in the navy. Was he disappointed to leave such a promising future behind? "Uncle Sam didn't care about the dream back then. You either went into the service or went to Canada," he replies.

After a tour of duty aboard the U.S.S. Ranger, stationed off the coast of Viet Nam, Barnes landed in Alameda. He decided to make California his permanent home, enrolling at San Francisco State to study business.

He took a part-time job at a gas station in San Jose to supplement his G.I. check, That was where he met his wife, a regular customer. Smitten, he started thinking about how to win her affection, again displaying his people skills. One day he noticed a bowling ball in the back of her car and seized the moment. She accepted his invitation to go bowling, and "that was it," he comments. They married in 1965.

Around the same time, Barnes started working at Fairchild Semiconductor-"like everyone else," he laughs. Despite still being in school, his job performance was not like everyone else's. His knack for working with people helped him breeze through a string of promotions, from line technician to supervisor to general foreman to division manager.

He left Fairchild in the early 1970s to join a start up semiconductor firm, where he stayed for about five years. Then, in 1976, he launched his own electronics service firm, Exsil, which reclaimed scrapped silicon wafers. As to be expected of a process that saved companies like Intel and National Semiconductor millions of dollars a year, Exsil flourished, growing to about 120 employees.

Barnes enjoyed the challenge tremendously, but he also experienced all the burdens and growing pains of being a business owner and CEO. "You have to be willing to give up a lot of things," he observes. "You're the last one to get paid or to take a vacation-if you get one. That's just the way it goes."

In 1983 he had the opportunity to trade some of the heavy lifting for stability by selling Exsil to an English company, Laporte plc. Originally in the chemicals business-the company was established in the 1880s to sell peroxide for bleaching straw for hats-Laporte was in full acquisition mode. Barnes spent six months at the helm of Exsil under the new ownership before being recruited to take on corporate responsibilities. His managerial skills were tapped to turn around money-losing manufacturing operations worldwide.

In one floundering plant, he spent the first two weeks of his tenure out on the floor as an operator, learning every job. This was his way to get to know the workforce, figure out where the problems were, and come up with solutions. Within six months under his leadership, the plant became one of Laporte's most profitable operations.

"When I think of my challenges, this is what I really enjoy. I love seeing people develop, work up the line to positions with more skill or responsibility," he comments.

To further explain his management philosophy, he cites an experience from his days as a supervisor.

"There was an operator who was very low performing. One day I got on her, and she broke all production standards - wow! The next day I did the same, and so on. When it came time for her review, I said to her, 'Do you see why I goaded you every day? The madder you got at me, the better you performed. Who gets the benefit? You do, with an outstanding review, for the first time.'

"When you manage, you're dealing with personalities, and you have to find a way to reach each person individually," Barnes continues. "This is why good managers are so hard to find - you either have the knack of working with people, or not."

RETURN OF THE ENTREPRENEUR

After 11 years of living out of a suitcase, Barnes decided it was time for something completely different. He purchased a magic store not too far from his home in Campbell. Even though the store was open seven days a week, he enjoyed the change of pace. It was "relaxing," he says, and a welcome departure from a life of global travel. He owned and ran the store until 2001, when he moved full time into his weekend home in Bethel Island and the commute became unreasonable.

Five years of retirement ensued. A member of Castlewood Country Club, Barnes found himself getting up early to play golf, then returning home to fall asleep after lunch. "My brain was getting stagnant," he confides. To allay his self-confessed workaholic tendencies, he decided to open a coffee shop. "I had never owned a franchise. I always started the business on my own, but I liked the idea of putting coffees and smoothies together, especially with the Hawaiian theme." He had noticed how successful the concept was for Starbucks and Jamba Juice, often next to each other despite separate ownership. Barnes spent about a year finding a site for the Bay Area's first Maui Wowi, which debuted in 2007.

He really likes the new location at 4833 Hopyard Road: the foot traffic is steady, and his is the only coffee shop in the complex. He spends most of his waking hours at the store, from around 5:30 in the morning to 9:30 at night. "I may not be working the whole time, but I am always present," he says, again displaying his common-sense approach. "I don't think anyone's going to run the business the way you run it. To be successful you have to be around. Customers really like it."

Barnes does leave early on Sundays to give himself some downtime, but his current pace is unlikely to slow down soon. Instead, he wants to open more Maui Wowi stores. "Then I can sit back and just manage," he notes. With his hands-on penchant, he probably will not stay sitting down for long.