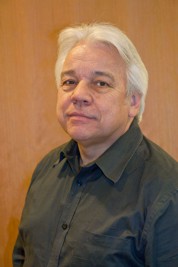 One of the first things you notice about Paul Wakefield is his unmistakable British accent, simultaneously telegraphing authority and charm. Then comes his ready laugh. The California transplant has a "carpe diem" vigor that bubbles over into every conversation. Together these traits create a combination that immediately puts people at ease from the very first meeting.

Wakefield's blend of credibility and humor serves him well as a marketing professional. On the one hand, he is a disciplined high-tech guru, an expert in the esoteric art of online search, able to keep up with the latest algorithms. Then there is his creative streak: who else would have named a new joint venture That'll Do Pig Video Productions, after a line from the porcine-centric movie Babe?

His original firm, Creatability, has undergone a shift in focus since its inception in 2005. Originally, Wakefield's specialty was website creation and design, but the mass migration to the Internet has transformed the online arena into a universal Yellow Pages.

"Eighty percent of the people looking for a product or service go to the Internet," he explains, noting that "being there" is no longer enough. The ever-increasing sophistication of the search function has created the need for a new skill set: getting found.

Rather than just building a company's website, Creatability now builds its web presence. SEO (search engine optimization) plays a role, but local search engine marketing is often just as important. "It all basically comes down to how to win the popularity contest called Google," he quips.

Almost 20 years in corporate marketing led Wakefield to an early understanding not just of the power but the vast potential of the online universe. "I started looking at local Internet marketing, and what struck me was that so many businesses have absolutely no idea how to do it right. There are over 40 million small businesses in the U.S. Sixty percent are nowhere to be found online; 40 percent don't even have a website. They are missing out on attracting customers, which they can't afford to do, especially in this economy. I have the opportunity to help small businesses thrive and grow, which is a pretty nice feeling."

He even distilled much of his own learning into a recently published book, "Paul Wakefield's Guide to Marketing Your Business Online," available through Amazon.

THE OTHER SIDE OF THE POND

Born in London, Wakefield grew up in a small village about an hour to the west, Stoke Poges, not far from Windsor Castle. He was surrounded by history going back more than 1,000 years to William the Conqueror. In 1601 Queen Elizabeth I was entertained in the local manor house, which later became the property of Pennsylvania founder William Penn.

With his father an electrical engineer, it was almost preordained that he, too, would follow the technology path. His passion was sparked early on when the only way he could get his hands on a computer was to build one himself. He attended London Imperial College, the branch of London University specializing in engineering and technology. After graduation he worked as a software engineer and then moved into marketing for a major semiconductor company.

A transfer to the Bavarian region of Germany gave him the opportunity not just to advance his career but to hone another passion, skiing. Although there had not been much opportunity to pursue the sport in England, as a young teen he frequently took advantage of a nearby artificial slope. His first exposure to natural terrain came at the age of 15, on a school trip to Switzerland. "We were 24 kids on a train, and it was hilarious." Already displaying his thirst for adventure, instead of being terrified on his first encounter with a real mountain, his reaction was an exuberant "Let me at it!"

As an adult, living just outside of Munich put him in close proximity to the Alps, where he reveled in the stunning scenery and the skiing. While quite different from home, he developed an appreciation for living in a country where the culture and language are so different. He also found comfort in a few similarities: "great history and great beer. It was also close to Austria, Italy, France, and Switzerland," he remarks, "so visiting other countries was just a weekend getaway."

His work life also provided the opportunity to travel across Europe, from Scandinavia to the Mediterranean countries. In the late 1990s, when the California-based position as the company's worldwide director of marketing opened up, he was a natural candidate. Once again his wit is at the ready: "When people ask what brought me to the USA, I usually answer a 747!" he chortles, quickly adding, "It was, of course, the job." He and his wife and two daughters, seven and eight years old at the time, settled in Pleasanton and their second adopted country.

Wakefield remained in the corporate world for several years until deciding to give his creative side full rein. He struck off on his own with Creatability, running the firm from a spare room in his Hacienda residence. Along with web design, he was busy making short advertising videos for local businesses.

By 2009, he had outgrown his home office. "I was working on a project with someone else, and we needed working space to do everything we were involved in," he explains. A leased office in Dublin proved to be a wise decision.

"The best thing that ever happened was moving into a proper office," Wakefield muses. "I would strongly recommend it to any small business currently looking to change the way it works. The level of professionalism shoots up. Everything is so convenient, and it is much easier to keep one's personal and business life separate."

The following year he joined forces with Hilly Productions, a small webcasting firm, to land a few fairly large corporate contracts. That leap forward prompted Wakefield to re-think the video side of his business, spinning it off with a partner under the That'll Do Pig (TDP) moniker (for a full explanation about how they hit on that name, go to www.tdpvideoproductions.com/about/).

In November 2010, Creatability and TDP returned to Hacienda, this time into a fully equipped office in the Pleasanton Business Solutions (PBS) executive center at 4695 Chabot Drive.

"When PBS opened up, it was a huge opportunity for us," Wakefield comments. Not only was he glad to be back in the park, just a mile and a half from home, but the shared facilities have engendered strategic alliances with two companies with complementary skills he never would have met otherwise. "Now we can help our clients with almost any web issue because we have access to their expertise."

Still in the business-building mode, Wakefield finds most weekends taken up with the typical chores that come with being the single parent of two daughters. The younger is another "creative," studying product merchandising within the fashion industry and already working on her first online venture. He does manage to makes time for a different kind of creative workout-with one of the eight guitars, an even mix of classical and electric, in his collection. And he laughs a lot. "I subscribe to the theory that we only have so much time on earth, and we should use it up as best we can." Carpe diem, indeed.